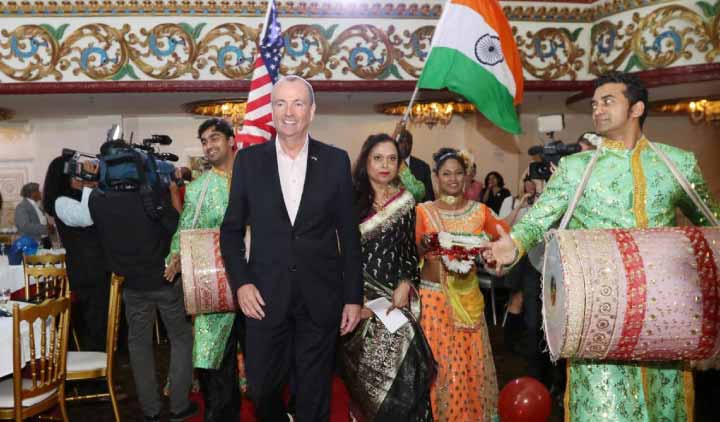 Tata Consultancy Services, an information technology service and consulting company, will expand its roughly 4,000 workforce in Metro Park by about 700 people, Murphy’s administration said. The company is based in Mumbai.
Larsen & Toubro, another Mumbai-based company, plans to add 600 technology jobs to its roughly 400 workers in Edison.

And Birlasoft in Edison, which is part of a larger Indian conglomerate CK Birla Group headquartered out of New Delhi, will add 160 jobs, according to the administration, which said the new jobs are a direct result of work in the lead-up to Murphy’s trade mission, and his presence here.

Murphy argues New Jersey is an attractive place for Indian business to grow because “there’s talent, location, and comfort” packaged together in the Garden State, where Indian-Americans represent the largest group of foreign-born residents in the state.

It’s one of the fastest-growing communities in the state.

And the personal connections made during face-to-face meetings during his week-long trip here will bolster that connection to the country, Murphy said.

“I’ll be very surprised when we look back in a year-ish, I’ll give myself a year, that thousands of jobs had not come out of this, in one form or another,” Murphy said. “Some of that may have happened, in fairness. But I think at a minimum, even if it were to happen, we’ve accelerated that — and these are real jobs.”

On Monday, Murphy announced the state is opening an office here to lure businesses to the Garden State. New Jersey already has a similar jobs attraction office in Berlin.

<p”>Both are paid for by Choose New Jersey, a business-funded nonprofit formed in 2010 at former Gov. Chris Christie’s urging.

It’s made up of some of the state’s largest utilities, labor unions, and financial companies. Its stated mission is to attract businesses to the Garden State. The group’s board members — which include PSE&G, Horizon Blue Cross Blue Shield of New Jersey and PNC Bank — have deep business stakes with New Jersey that intersect with government oversight.