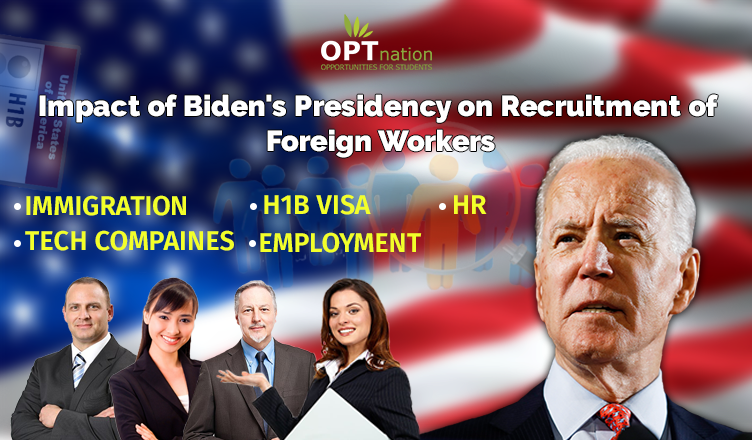 It is about to be a week since Joe Biden has held the presidential office. The very first day in the office recorded Biden’s stalwart amount of work to re-roll the Trump legacy. Within hours of holding the office, the president made some major changes in many areas of working. The most concerning changes lie in the sector of labor rules, employment rules, and immigration policies.

The agendas in these sectors include raising the minimum wage bar to $15 per hour, bringing in policies to enforce equity and equality in the work environment. It also aims to increase the cap of employment-based visas and other working visa programs, to appeal and bring out changes in the existing right-to-work laws in various states and such rules on asylum policies alongside up taking the existing immigration rules.

The majority of the immigration rules laid down by President Donald Trump has done nothing like a positive impact on the slumping economics of the United States of America. These rules were brought in under the pretext of bringing back jobs to US citizens. Nothing of that sort has yet happened rather it seems to have a reverse domino’s effect in bringing down their existing jobs.

Highlights of this article

This article will focus on Trump’s actions in the sector of immigration and the impact of Joe Biden’s office on the department of immigration policies.

1.    Immigration restrictions introduced by the Trump government and their implications

The major restrictions seen are the stricter standards that were brought in to cut down on immigration as a whole. These restrictions included cutting down on Medicaid, food stamps, and similar benefits provided to immigrants. The basic say in implementing all these restrictions was ‘to not pass on the nation’s benefits to the immigrants.’ Other than this, the rules of immigration visas have been made stricter. They have started including face to face interview. This is also seen in the case of employment-based green cards.

These rulings don’t affect US residents, immigrants on health care visas, or researchers, EB-5 qualified immigrants, immigrants in the army, or law enforcement departments, and their families. The stats show that the immigrant visa stamping has reduced by more than 1,50,000 from 2016 to 2019.

The modifications on the H-1B visa included the wages of the visa holder to be similar to the US employees in the same positions. While this comes as a piece of happy news, the eligibility criteria have been made more strict and narrow. The restriction that was stuck on H-1B visas is the awarding of the H-1B visa to well-paid skilled immigrants and not to those who are paid less in comparison to their American counterparts. This restricts the majority of the silicon valley companies which makes good use of H-1B visas for their growth.

The denial rate on new petitions has gone up by 24% in 2020 as compared to 2016. The immigration cuts have become so much that O-1 visas that are provided for people with extraordinary abilities were being denied based on the pandemic situation around the globe.

On Jan 11, 2021, Joe Biden stated that he would put up immigration legislation that will nullify all the policies set forth by the Trump government. This was in response to the question of what will his administration do first after taking up the office on Jan,20. Earlier, he had said that he would bring an overhaul in the lookout of immigration within 100 working days.

The changes that have been presented by the Biden government are

How to Make a Successful H-1B Petition File?

The moment Biden took over the presidential office, he put a freeze on all actions taken by Trump. Many consider the Trump government to have done more harm to the major economy of the USA. To put a simple example, his actions of retracting support for DACA protected individual would have led to their deportation. We are speaking here about 750,000 people. Their deportation, all in all, is estimated to have cost the USA about $60 billion and an economic loss of $280 billion spread over the coming decade. If this law came to fruition, the already plummeting economy would have gone on a spiral downwards.

Many reversals against the Trump government’s actions have already been put into play. These reversals will help businesses to select from a potential intensive global talent pool. This move will help recuperate their finances and find potentially suitable employees for their firms. Biden’s presidency is supposedly trying its best to ‘Make America Great Again’. Only Time will be the judge to how far will they be able to reach their goals.