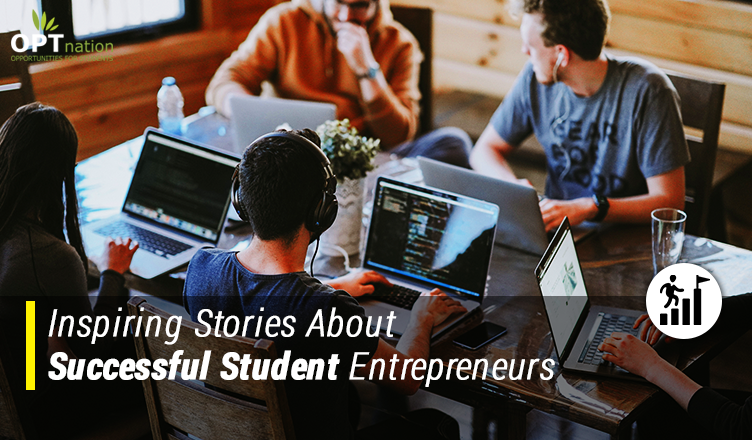 Nowadays starting a business is much more accessible than ever. There are many online opportunities when it comes to launching, researching, and even gathering funding. No wonder that many students are trying to start their businesses while in college. Although it might be difficult, the possible success is worth the risk. There are students with motivation who become successful student entrepreneurs after a hard road of work and practice.

Whether you are thinking about starting a reliable paper writing service, online book store, or developing a mobile app, the opportunities are there. And if you need inspiration, here are some success stories of student entrepreneurs to look at.

This year, Keiana Cave was listed as one of the youngest entrepreneurs in the Forbes “30 Under 30”. She is the founder of Sublima Pharmaceuticals, a startup that is working on the first non-hormonal birth control medicine. She is a CEO and Chief Scientist at her company, which is incredibly inspiring.

In the year 2014, she won a $10,000 award at New Orleans Entrepreneur Week for her work and it became the start of her company. She gained more funding and continued her research at the University of Michigan, where she also acquired a BA in Chemical Engineering and Entrepreneurship.

Not only did she combine her education with prominent research and business, but also started a product that can make a positive change in the world. Her goal is to inspire and empower women all over the world while giving them more control over their bodies.

Even if you’ve never heard these names, you’ve definitely heard about their creation – Reddit. This incredibly popular website started at the University of Virginia, where these two students were enrolled.

At first, they wanted to work on a sandwich ordering app but ended up with an online bulletin board. The idea was also to give online democracy to users where they can vote whether the content is helpful/interesting or not.

Only 16 months after launch, they sold their product and became multi-millionaires. And Reddit is still one of the most visited sites worldwide.

Grace Beverly is in her 20s but she is already the founder of sustainable fitness label TALA. She is the CEO of the company that has sustainability and body inclusivity as its mission.

She started her company while being at college. Beverly studied music at the University of London and then at Oxford. But her passion led her different ways so she also acquired Harvard Business School certification and worked on her company.  Beverly was also featured at the Forbes “30 Under 30” at the age of 23.

TALA promotes slow fashion and creates high-quality fitness gear for people of all sizes. Beverly recommends young entrepreneurs to believe in themselves and not to view age as a barrier or challenge in pursuit of their dreams.

This is a rather old one, yet still very exciting to learn. Time Magazine, world-known publishing, was once founded by two students. At that time they studied at Yale and worked together at the Yale Daily News.

Time was the first weekly news magazine in the US with the first appearance in 1923. And it remains a well respected and famous publisher.

Today WordPress is the most popular software for building websites in the world. The majority of all websites existing today are built with it (about 60%). It is an easy-to-use tool that was created in 2003 at the University of Houston.

It all started when the old blogging solution was discontinued and two students decided to create a new one with the use of previous technology. And they managed to create an excellent content management system that continues to develop and grow.

When people talk about entrepreneur success they often list tech startups. The development of the internet and technologies made many opportunities possible. But it is not only about the IT industry.

Frederick W. Smith is the founder of FedEx. The idea of an overnight shipping company was actually his project for Economics class at Yale University. He found this idea extremely promising and decided to work on it.

Obviously, his company succeeded. Nowadays FedEx is one of the largest shipping companies globally. But it all wasn’t so great at the beginning.

Frederick used his inheritance to launch the business and lost $29 million in the first 26 months. Despite this failure, he continued to work and made the company extremely profitable.

Garrett’s story is not only about creating a great product but also about timely delivery. Nowadays he is an adventure journalist, but he is most well-known for creating Scan Inc. and selling it to Snapchat for $54 million later.

At a time, he was a student of Brigham Young University that couldn’t find a useful QR scanning app. So he decided to design it on his own. It took about 6 months to develop the application. And it became a huge success.

One of the ways of making the app popular was the idea to make it useful for iPad 2 right after its launch. So as soon as the device was available, the app was featured in articles like “10 useful apps for iPad2”. His plan worked because of well-crafted timing.

Overall, the startup became a huge success and Garrett was able to sell it in 2015.

Benefits of Financial Planning in the Growth of a Business

Benefits of Using LinkedIn for Your Career

Snapchat itself is a result of student entrepreneurship as well. In 2011 three Stanford University students created a picture exchange app for friends. It was a project for a product design class at first.

The idea was to share funny and possibly awkward pictures that otherwise one wouldn’t want to be on social media. Now people could send them and do not worry about removing tags after. This is what made Snapchat so different – it was not about ideal photographs but about sharing the moment.

The company is a huge success today.

Zuckerberg is probably one of the most well-known student entrepreneurs now. Of course, there is hardly a person that hasn’t heard about Facebook, yet the list wouldn’t be full without him.

In 2004 Facebook started at Harvard University as a platform to connect Harvard students. At first, Zuckerberg designed the Facemash app that allowed rating other students as hot or not. But it was shut down as the student IDs were acquired by hacking.

After that, he worked with others to create Facebook. At first, the site was available only for Harvard students, then other Ivy League schools joined in, and now it is open to anyone worldwide. There is even a movie about Facebook and how it all began.

In many ways, college is a perfect time to try out entrepreneurship. There are many resources available for students as well as like-minded young people around. One can also hugely benefit from following relevant courses and combining study and business all in one. These stories should serve as an inspiration to take a chance and go for it.