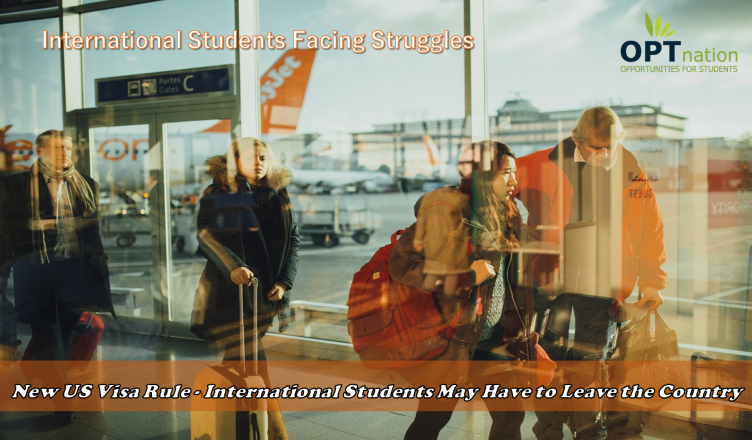 International students who are pursuing degrees in the United States will have to leave the country or risk deportation if their universities switch to online-only courses, Immigration and Customs Enforcement announced Monday.

On Monday, US Immigration and Customs Enforcement (ICE) issued new rules to all educational institutions in the country. The new rules mandate that international students on F-1 and M-1 visas who are currently in their home countries will be denied entry into the US if their universities go online in the fall semester – like Harvard University, for instance, plans to do.

In the news release on Monday, ICE said that students who fall under certain visas “may not take a full online course load and remain in the United States,” adding, “The U.S. Department of State will not issue visas to students enrolled in schools and/or programs that are fully online for the fall semester nor will U.S. Customs and Border Protection permit these students to enter the United States.”

Universities nationwide are beginning to make the decision to transition to online courses as a result of the coronavirus pandemic. At Harvard, for example, all course instruction will be delivered online, including for students living on campus. For international students, that opens the door to them having to leave the US.

The agency suggested that students currently enrolled in the US consider other measures, like transferring to schools with in-person instruction. There’s an exception for universities using a hybrid model, such as a mix of online and in-person classes.

“There’s so much uncertainty. It’s very frustrating,” said Valeria Mendiola, 26, a graduate student at Harvard’s Kennedy School of Government. “If I have to go back to Mexico, I am able to go back, but many international students just can’t.”

The move may affect thousands of foreign students who come to the United States to attend universities or participate in training programs, as well as non-academic or vocational studies.

Brad Farnsworth, vice president of the American Council on Education, said the announcement caught him and many others by surprise.

ICE has not given a clear or persuasive explanation for the rule change. It appears to serve two of Trump’s political objectives, both paranoid talking points for his base. One is to limit the legal immigration of “non-white” races to the US. The second is to force businesses to physically reopen to publicize a false sense of normalcy in the midst of a massive public health crisis.

“We think this is going to create more confusion and more uncertainty,” said Farnsworth, whose organization represents about 1,800 colleges and universities. “What we were hoping to see was more appreciation for all the different possible nuances that campuses will be exploring.”

One concern with the new guidance, Farnsworth said, is what would happen if the public health situation deteriorates in the fall and universities that had been offering in-person classes feel they have to shift all courses online to stay safe.

Visa requirements for students have always been strict and coming to the US to take online-only courses has been prohibited.

“These are not some fly-by-night universities, these aren’t scams, these are legit universities who would normally have in-person curricula but for coronavirus,” said Theresa Cardinal Brown, director of immigration and cross-border policy at the Bipartisan Policy Center.

“The bigger issue is some of these countries have travel restrictions on and they can’t go home, so what do they do then?” she added. “It’s a conundrum for a lot of students.”

“We think this is going to create more confusion and more uncertainty,” said Farnsworth, whose organization represents about 1,800 colleges and universities. “What we were hoping to see was more appreciation for all the different possible nuances that campuses will be exploring.”

One concern with the new guidance, Farnsworth said, is what would happen if the public health situation deteriorates in the fall and universities that had been offering in-person classes feel they have to shift all courses online to stay safe.

Visa requirements for students have always been strict and coming to the US to take online-only courses has been prohibited.

Farnsworth said he sees the announcement as part of a larger pattern of moves by the administration that “have not set the right tone.”

“This is going to create I think more anxiety on the part of international students, and for those who are still thinking about where they’re going to go in the fall, I think this may push them in the direction of attending a university in another country,” he said.

While students might have the option to transfer to a college or university offering in-person courses, it might be difficult to come by amid continued concerns over coronavirus. Some schools have announced plans to bring students back but shorten semesters, as well as cancel nearly all in-person classes through the semester.

According to the EducationData.org, while the overall number of international students in the US has been falling since 2017, international students make up 5.5% of the total student body of American colleges and universities. Undergraduate students constitute the bulk, followed by graduate students and those with optional practical training visas. The largest number are from China, followed by India, South Korea, Saudi Arabia, and Canada. They pay an average of three times the tuition paid by domestic students, with research indicating that the high net payments from international students cross-subsidize domestic American students. According to figures from 2018, they contributed an estimated $45bn to the American economy.

Education should not be used to exclude and disenfranchise students. These extreme F-1/M-1 visa restrictions are an act of blatant educational discrimination. There should be no difference between a citizen student and an international student. The absence of either is of imminent concern.

Source: CNN and The Guardian