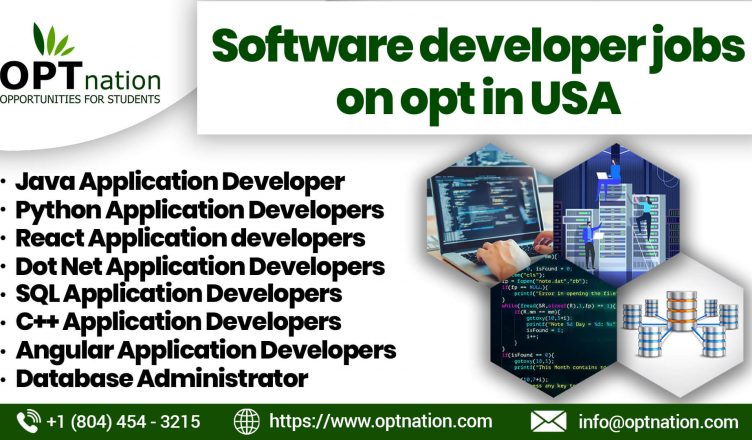 What is Software Developments and who are The Software developers and Programmers?

Software development is the process of developing computer programs. The term comes from the idea that these programs are written using code (i.e. “software”) just as human programmers write computer programs in languages like C++, Java, etc. Software Development can be describe as a systematic approach to writing computer programs. Programming involves the use of computer languages (such as C++, Java, Python, etc.), high-level programming environments (IDEs), and compilers. Let’s Discuss Software Developer Jobs on OPT in USA .

The primary goal of any software developer is to write code that solves real world problems. Software developers work closely with others – both inside and outside their organization – throughout the entire software development lifecycle (SDLC). A typical SDLC consists of four major steps: requirements gathering, design, coding/testing, and deployment.
Software Development is the use of computer programs to create applications. There are many different kinds of software, including business-oriented software, web-based software, database management systems (DBMS), and programming languages.

There are two types of computer programs, client programs and server programs. A client program runs on a user’s machine. The client is responsible for displaying graphical elements, receiving input from the user, and sending output back to the user via the display device. A server program runs on a separate computer from the user. The server is usually designee to receive requests from the client program and perform actions based on those requests. Server programs often provide services to clients. These services frequently involve transferring files and performing some type of remote procedure call. Examples of servers include email servers, file transfer protocol servers, and gaming servers.

A computer program consists of instructions written in a high level language that tell the computer what to do. These instructions are then translate into low level language call assembly language. Assembly language is essentially machine code. Machine code is the binary equivalent of the human languages word.  Also It is a combination of ones and zeroes, just like letters in an alphabet. In order to run a computer program, machine code must first be convert into a format understand by the microprocessor. This conversion will be make using a compiler. Compilers allow programmers to write their code in any high level language they choose, while still making sure that the resulting code conforms to the instruction set supported by the processor.

Most modern processors have compilers built into them. When a program will be  compile, the programmer provides the compiler with information about how the program should be structures. The compiler takes care of translating the source program into the binary machine code that is compatible with the particular processor being use. Assemblers take the generated machine code and convert it into a higher level language known as human readable assembly language. This means that a person familiar with the assembly language can read and understand the resulting code without needing to know anything about the underlying hardware.

During this stage, software developers collaborate with stakeholders and identify the system’s functionalities, the structure of its data models, and the flow of program logic. Design entails brainstorming and the documentation of concepts in terms of diagrams and prototypes. This phase includes the planning and specification of data structures, algorithms, and error handling.

This is where actual coding takes place. While some programmers prefer to stay out of the testing process, others consider themselves testers first and coders second. Regardless of preference, testing ensures the quality of the finished product. Developers write unit tests that exercise individual units of functionality and verify correct results. Similarly, they write integration tests that verify proper interoperation between modules. Finally, they write end-to-end tests to ensure the whole application works correctly.

When complete, the product is ready to deploy. Deployments involve packaging and distributing the application to users, deploying updates, and monitoring systems for errors. These actions may be carried out manually or automated, depending on the type of deployment environment.

A web developer is someone who makes websites, apps, and mobile sites. A web developer could have skills that range from coding HTML, CSS, and Java script to designing and building responsive layouts for different screen sizes. In order to become a good web developer, you should have a strong understanding of how computers function, some programming language experience, and basic graphic design skills.

Java Jobs as an OPT in USA

Java is an object-oriented programming language developed by Sun Microsystems, which was acquired by Oracle Corporation in 2010. As its name suggests, Java is mainly oriented towards developing software applications, although some have been written in Java for desktop machines (e.g., Creator – video editing application). The syntax of the language is based on C/C++ and uses curly braces {} to delimit blocks. All code  we writes in Java must be store inside of classes name with uppercase letters; methods declared using lowercase convention may only appear inside of classes and interfaces. To declare a method in a class, use the public keyword followed by the return type and then a list of parameters enclosed between parentheses (). Methods do not necessarily need to take any arguments: they may be void methods whose signatures are simply () or they can be methods taking no arguments at all.

OPT Jobs in USA as a Python Programmers

Python is a widely use in high level, general purpose, dynamically typed programming language that provides ready access to powerful extensions built around standard languages like C, C++, Perl,… An interpreted scripting language, it’s simple enough for beginners to learn and powerful enough for experts to master. Its dynamic typing allows programmers to add features to their programs easily without having to rewrite them each time they want to change something about the program. In addition, Python supports modules, exceptions, Unicode, rich input/output facilities, interactive mode, and much more. Python comes bundled with several useful libraries. 639 Python Developer Jobs In Anywhere in USA

React is a JavaScript library for building user interfaces. Written in plain JS, it offers two ways to build components: declarative via markup and imperative via set State. The first way is similar to how you’d write HTML in a traditional web page, while the second approach is functionally equivalent to manipulating state in a widget library. 604 React Developer Jobs In USA

Dot Net jobs in USA as an OPT

This is a framework for building multi-platform applications using Microsoft’s Common Language Runtime for running on Windows operating systems, Mono for Linux, Mac OS X, iOS, Android, Azure Mobile Apps, and Xbox One. It also contains the.net Framework, a collection of manages libraries and tools designed for building cross platform applications. A core feature of dot net is that it includes a native data binding engine that enables you to bind directly to XML documents, JSON objects, and relational databases. You can develop client side applications using html and CSS or create server side applications using ASP .NET MVC. Software Developer Jobs on OPT in USA. 731 Dot Net Jobs in USA

SQL stands for Structured Query Language and is a computer programming language that facilitates data querying and updating. Programmers are using it as a command line interface tool with data management tasks. SQL queries are typically run over a database using various commands, including SELECT, INSERT, UPDATE, and DELETE. The following example shows basic syntax for a SELECT statement: SELECT field FROM table WHERE condition. 476 SQL Jobs in USA

C++ is an Object Oriented Programming (OOP) language. It is popularly known for being the basis of many commercial and open source projects. OOP is a design paradigm where a computer program is organizing in a series of interacting classes. Code within a class is call member function and interacts with other members of the same class. 388 Software Developer – C++ Jobs In USA

jobs as an Angular developers

AngularJS is a free front end development framework Develop by Google. It is an alternative view technology for building dynamic websites. AngularJS uses a dependency injection mechanism to manage dependencies and instantiates controllers and views at runtime. Unlike traditional MVC frameworks, AngularJS does not require a separate model layer. 10062 Jobs in USA

Computer vision is the study of technology that helps computers understand what they see in images and videos. There are many components to computer vision including image processing, object recognition, machine learning, segmentation, feature detection, tracking, modeling, and motion estimation.

This is a type of artificial intelligence where machines learn without being explicitly program. Machine learning algorithms work by feeding in sets of examples and then identifying similar cases based on their relationship to each example.

Deep learning is a subset of machine learning that involves complex neural networks. Neural networks are inspiring by our own brain structure and function. These types of models attempt to mimic the way we think by breaking down complicated problems into smaller, simpler parts. With neural network models, computers are able to learn patterns and associations in vast amounts of data very quickly.