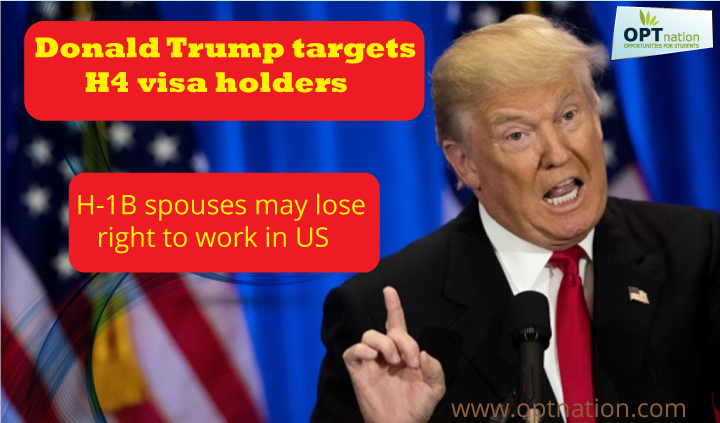 It’s not effortless for immigrants working on an H-1B visa working in the U.S. In 2015, the US administration under former President Barack Obama had passed a rule that the eligible spouses holding H4 visa are allowed to work while their counterpart holding H-1B visas would await to earn the permission for permanent residency in the   US. However, new decisions and changes are initiating after Donald Trump took over the Presidency of US.

While the move by the Obama administration was welcomed by the large H1B community which mainly included Indians, several American groups challenged this decision in a federal court in Washington DC.

Soon after the rule was issued, an appeal was filed by a group called Save Jobs USA against the work authorization for H4 visa holders but it was overruled. However, this group has once again appealed to the Trump Administration to look over the appeal filed by the Department of Justice.

On February 1, 2017 the Department of Justice had filed an appeal in the District of Columbia Circuit entitled “Consent motion to hold proceedings in abeyance for 60 days”. The government has asked for a 60-day pause in the case to “allow incoming leadership personnel adequate time to consider the issues.”

Ever since Donald Trump took over as US president he wanted to cut down the numbers of immigrant labour in the country as his entire election campaign revolved around “Buy American, Hire American”.

Under Trump immigration of two H-1B reform bills were introduced in the US with the impression of his agenda of cracking down on H-1B abuse; reduce H-1B workers and hiring more American worker force as a priority

After imposing the executive order of travel ban on seven Muslim countries to USA, now President Trump called for a “merit-based immigration system” in his congress speech.

Recently, the US had assured India that the H-1B visas issue was not a priority for it and would be part of the larger immigration reforms package.

After increasing the difficulty for H-1B visas by suspending the H-1B visa ‘premium processing’ for 6 months and now increasing the difficulty level of H4 visa work authorization, the Trump administration has increased the problems for the immigrant labour force working in the US as to clamp down the illegal immigration and reduce H-1B work forces.

Development comes barely a week after the US assured India and now Trump administration seeks a 60-day freeze on employment authorization for H4 visa holders. The appeal will impact thousands of Indians residing in the US with H4 visa.

Aman Kapoor, co-founder and president of Immigration Voice, which has now filed a motion to intervene in the case on behalf of thousands of H4 visa-holding spouses
The recent statements from the government present an unacceptable risk… that [the] DOJ might decide after 60 days to adopt the position of Save Jobs USA,” said Aman Kapoor, the co-founder of the Immigration Voice advocacy group.

In a statement, Immigration Voice said that this is “especially concerning” because  Attorney General Jeff Sessions, has previously called the H 4 Rule a “change in immigration law  that hurts “hurts American workers.”

“Immigration Voice on Tuesday announced to intervention in the Save Jobs lawsuit arguing that this was the “only option” to protect the rights of its members and their families, including children who are US citizens.” the organization said.

Even though this rule has actually allowed many H 4 visa holders, including named intervenors, the ability to start businesses in the United States that employ American workers that would otherwise not have jobs if the rule had not been promulgated, Immigration Voice said.

In fact, the Immigration Voice intervention cites the case of highly qualified spouses, who, in many instances, added to the US economy both in terms of revenue and jobs.
“There is nothing for the Department of Justice attorneys to confer with their leadership about given the District Court’s clear decision stating that this case had no basis for ever being filed,” said Aman Kapoor co-founder and president of Immigration Voice.

Even as the uncertainty over the H1-B visa persists, there could be more bad news waiting for Indians working in America as the Trump administration now seeks a 60-day freeze on employment authorisation for H4 visa-holders that allows spouses of H-1B visa-holders to work in the US

The move will affect at least thousands of Indians who are living there in the US on H4 visa.