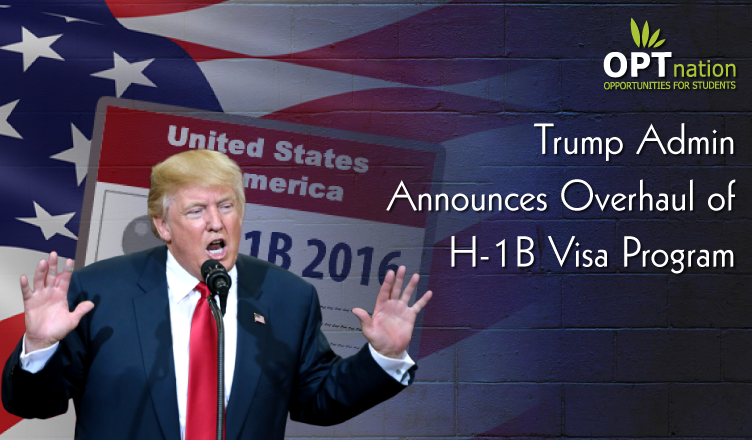 The Trump administration announced an overhaul of the H-1B visa program for high-skilled foreign workers that will require employers to pay H-1B workers significantly higher wages, narrow the types of degrees that could qualify an applicant and shorten the length of visas for certain contract workers.

The changes, introduced by the Departments of Labor and Homeland Security on Tuesday, will likely make it tougher to qualify for one of the coveted visas.

Ken Cuccinelli, the No. 2 official at DHS, said on a news conference call Tuesday that he expects about one-third of H-1B visa applications would be rejected under the new set of rules.

Mr. Cuccinelli and Patrick Pizzella, the deputy secretary of labor, said the changes were necessary to protect American workers, whom the administration believes are being undercut by foreign workers on H-1B visas who are paid lower wages to perform similar jobs.

“America’s immigration laws should put American workers first,” Mr. Pizzella said, pointing to what he described as insufficiently stringent wage requirements on foreign workers in the H-1B visa program. “The result is U.S. workers are being ousted from good-paying, middle-class jobs and being replaced by foreign workers,” he said.

The policy changes have been expected since 2017, when the administration first announced intentions to reform the H-1B visa program. Even before these formal changes were announced, however, the Trump administration tightened issuance of H-1B visas, rejecting 15.1% of applications in 2019 compared with 6.1% in 2016, according to figures from U.S. Citizenship and Immigration Services.

Business groups and immigrant advocates criticized the overhaul, saying the Trump administration was attempting to solve a problem that doesn’t exist on a broad scale.

A federal judge in San Francisco last week blocked the Trump administration from enforcing its ban against many of the biggest U.S. companies bringing in foreign workers under H-1B and other visas. TechNet, one of four business and trade organizations that brought the suit, said Tuesday’s announcement flouted the court’s ruling.

“Changing the requirements around H-1B and other work visas will only hurt American companies that depend on high-skilled workers who fill critical positions while we work to grow our domestic [science, technology, engineering and math] pipeline,” said Linda Moore, TechNet’s president and chief executive officer.

Jon Baselice, executive director of immigration policy at the U.S. Chamber of Commerce, another one of the plaintiffs in the suit, said, “We’re still evaluating these proposals, but both of these rules have the potential to inflict serious harm upon many American companies.”

The Labor Department’s wage-scale revision would significantly increase the required wages employers must pay their workers on H-1B visas. The requirements, which are set to take effect Thursday, are based on surveys of the range of salaries paid in particular professions.

Because those required wage increases take effect this week, existing H-1B holders looking to renew their visas might not qualify unless their employers raise their salaries accordingly.

The Department of Homeland Security’s rule would narrow who qualifies for H-1B visas based on their specific education. Currently, foreigners with a college degree or the equivalent amount of experience can apply to work in what is known as a specialty occupation. Under the changes, an applicant must have a college degree in the specific field in which he or she is looking to work. A software developer, for example, wouldn’t be awarded an H-1B visa if that person has a degree in electrical engineering.

That requirement could make it tough for technology companies to hire in emerging fields like artificial intelligence or bioinformatics, which combines biological data, computer science and mathematics. Experts in such fields may have studied other subjects, or degrees in some subjects may not have existed until recently.

The only exception to this rule is for fashion models, who aren’t required to have college degrees. First lady Melania Trump, who worked as a fashion model when she first moved to the U.S. from Slovenia in 1996, was an H-1B visa recipient.

The new rules also aim to curb business arrangements under which an H-1B worker hired by one company works primarily at a second company. Those arrangements would receive more scrutiny in the application process, and these workers would receive visas that are valid for only one year instead of three, as are most H-1B visas. That would increase costs for employers, who would need to file new applications for their workers annually.

The changes target information-technology companies that rely on H-1B workers, mostly from India, whom they outsource to companies to work as on-site IT staff. Critics of the H-1B program take issue with these deals, pointing to companies that lay off internal IT staffs in favor of cheaper outside workers. The arrangement is common in several industries including human resources and consulting.

The new policies were issued as interim final rules, meaning they will take effect without first undergoing a public-comment and review process that is customary for such rules. The administration also waived its typical regulatory review process before issuing to the rule in order to be able to publish it faster.

Administration officials said both measures were necessary to speed the policy changes in the midst of the continuing economic fallout from the coronavirus pandemic.

The government issues about 85,000 H-1B visas each year, though it receives many more applications than it can accept.

Even if the rejection rate rises, the number of workers on visas is likely to remain roughly stable, said Theresa Brown, director of cross-border policy at the Bipartisan Policy Center, a Washington-based think tank.

“If you’re saying you’re doing this because lots of people are unemployed, I don’t see anything in here that says there will actually be fewer H-1B workers,” Ms. Brown said.

The rule’s economic analysis states that, wage increases aside, the other changes DHS is requiring will cost employers about $4.3 billion over a decade.

“Instead of pursuing targeted policies that would root out real fraud by unscrupulous employers, they are demonizing half a million employees and presenting no compelling evidence that they actually depress wages,” said Doug Rand, who advised the Obama administration on immigration policy and co-founded a company that helps people apply for green cards. He said the accelerated pace was part of Mr. Trump’s re-election strategy.

Democratic presidential nominee Joe Biden’s immigration platform says he supports moves such as raising the required wages for H-1B workers. His campaign didn’t respond to a question about whether the former vice president would keep the Trump administration’s changes in place. The next Congress could vote to reverse the changes under a law called the Congressional Review Act.