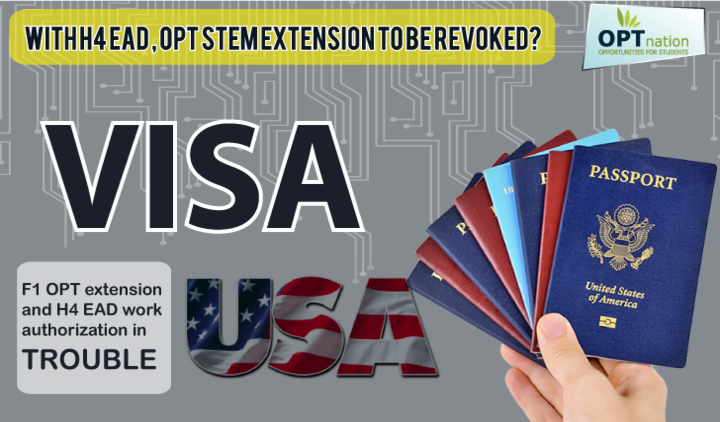 We have been hearing recent updates about President Trump’s OPT Plans for reforming the Immigration System and stop illegal immigration. Recently an executive order has been signed by President Trump for H1B and many can be in future. Top official in the Trump administration have been talking about changing the H1B visa, H4-EAD and OPT Extension for a long time. Many executive orders are on the line to reform the immigration system.

One of the Donald Trump’s plans is to reverse Obama’s extension of the duration of Optional Practical Training work visas or science, technology, engineering and mathematics (STEM) students.

As per the Leaked memo form Vox of Executive Order, the Trump admin could revoke 24 Months STEM OPT Extension, H-4 EAD. Here’s one of the sentences from Vox that mentions the same:

“The order itself contains a variety of provisions. One would reverse Obama’s extension of the duration of Optional Practical Training work visas and decision to allow the spouses of H-1B guest workers to also have work permits. Another would undo relief Obama has granted to people eligible for green cards but unable to apply for them due to what’s known as the three- and ten-year bars.”

The Trump admin has sought 60 days to “consider” its response for decision to allow spouses of H-1B visa holders to work i.e to revoke H4 work authorization or not. Now the Trump government has also prepared a draft that looks to revoke extension of OPT. According to Indian education consultants, the new administration could altogether revoke OPT which could also impact international students planning to study abroad in the US.

OPT STEM extensions allowed international students with STEM degrees to stay in the US for as much as three years after graduating from college. Foreign students use the OPT status to either look for jobs or apply for further education or simply float around till the OPT term expires. OPT extension to H-1B transfer would also not be the first choice for the OPT holders as the reforms for H-1B is more than OPT and Trump has strong stance over H-1B visa abuse.

The move could definitely impact number of Indian students studying in the US which has been on the rise. Indian students may now have to either secure jobs much before they travel to study in the US or look for other immigration friendly countries like Australia, Canada and New Zealand. But recently Australia has also raised a strong move over work visas and US may impact other countries to be tight on immigration reforms.

Many universities have spoken out against Trump’s controversial executive order on immigration and have been vocal about welcoming foreign students even before he took over. Top US colleges and universities including Yale, Northwestern and University of Virginia launched a campaign to reassure overseas students that their campuses would always be welcoming to enrolled and aspiring foreign scholars just weeks after Trump won the election. But that hasn’t been enough to diminish student concerns.

Of the over 165,000 Indian students going to US for studies, roughly 65% are estimated to go for STEM education or about three-fourths of them being in STEM programmes. Of these, about 75% are estimated to use OPT every year to stay back for different reasons.

“Obviously there will be an impact. The OPT is used in multiple ways. Firstly, students who have no job offers when they graduate rely on the OPT to help them sustain in the US. Secondly, for those who have a job offer but have to wait till the time the company officially sponsor an H1B visa, the OPT comes in handy. Thirdly, it is used by explorers who want to do research or those who float around to explore other options. But now, when you graduate you better have a job in hand and that company has to quickly convert your visa status from a student to a work visa,” says Vibha Kagzi, founder and CEO of ReachIvy, which advises students on applying for international studies.

However, revocation of OPT’s extension by Trump may not impact students going to top schools like Stanford or MIT since the trend of securing jobs in these campuses is relatively higher. Unlike, this could impact students going to tier-2 and tier-3 universities in the US. “Students graduating from schools where placements are not high are going to face the brunt of this move because it gives them no margin to stay in the US and secure something and then get an H1B visa,” Kagzi added.

Now the task of seeking jobs for F1 visa students after graduation will now have to be done early. The undergraduates who want to stay back may now have to apply for post-graduation or apply for PhD for continuing in USA. A sudden restricts or changes on advanced STEM students many not only impact the number international student coming to US but may also impact the US universities in some or the other ways.

For Trump OPT, CPT, F-1 visa and H-1B visa tips and recent news about these visa status, follow our blog and add us to RSS feeds.