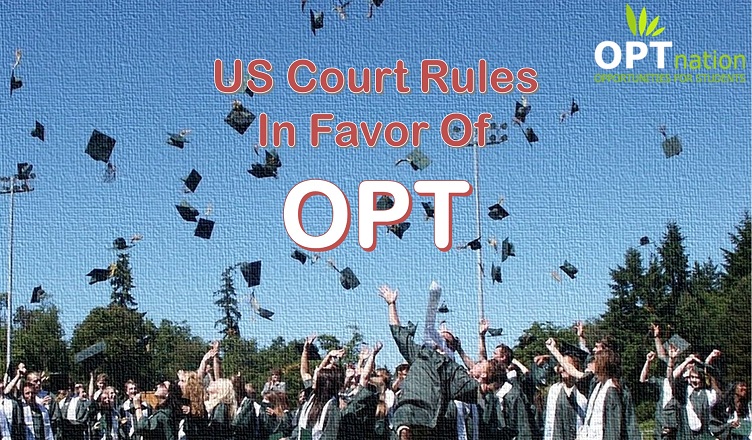 A federal district judge ruled in favor of continuing the Optional Practical Training (OPT) for international students. Ending a lawsuit by the Washington Alliance of Technology Workers, the courts reiterated that the OPT system, “benefits the American educational system, as well as the U.S. economy as a whole.”

On November 30, 2020, a District Court for the District of Columbia ruled that the OPT program is lawful that foreign students can remain in the U.S. to work through the Department of Homeland Security’s Optional Practical Training (OPT) program after graduating.

Optional Practical Training (OPT) is a legal working chance provided by the federal government for eligible international students. Students complete their OPT and gain experience in their field of expertise. This program provides them a chance to work within the US. The normal period of OPT is 12 months whereas for special categories such as Science, Technology, Engineering, and Math (STEM), an additional period of 24 months is provided.

It opens their chances of being sponsored for an H1-B work visa for 7 more years, extendable by another 3. By providing term employment to highly skilled recent graduates, OPT ensures that this talent pool grows the American economy, and support American economic competitiveness.

Per data collected from the Cato Institute, USCIS approved 223,284 OPT applications in fiscal year 2019. However, OPT processing delays of up to 46% had put many foreign students on F1 student visas in jeopardy. With this lawsuit settled in favor of continuing OPT for future, here’s hoping that both international student enrollment and OPT will see an increase.

Outline of the Issue

In the year 2014, The Washington Alliance of Technology Workers (WashTech) raised an allegation on the OPT program. The plaintiff stated that through the OPT programs, the jobs that were supposed to land with the US citizens were being siphoned by international students. They also stated that DHS has no authorization in such matters.

Later on, in 2016, the National Association of Manufacturers, US Chamber of Commerce, and Information Technology Industry Council – these three associations came up together alongside 118 universities to take up the case for the international students.

In light of this, courts handed the Department of Home Security (DHS) the authority to provide work authorization for the international students eligible for the OPT program.

How To Hire Good Employees? | Finding The Right Talent

The Outcome of the Issue

After rolling out the rule on November 30th, Judge Walton is expected to give a final ruling within 60 days explaining his reasoning. Meanwhile, the rules and regulations of the OPT program will remain in effect and will not face any changes.