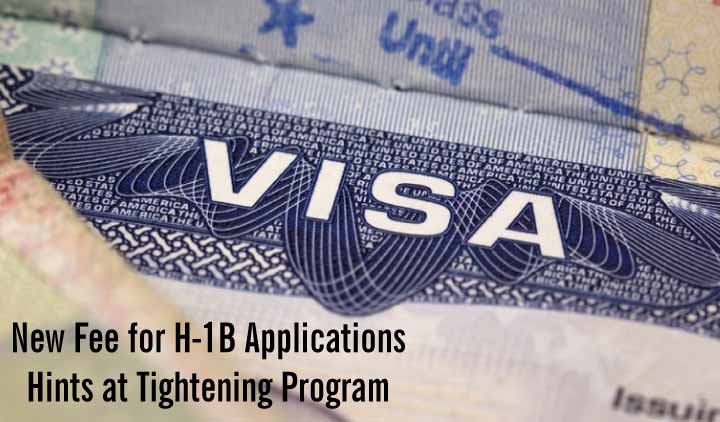 U.S. Citizenship and Immigration Services (USCIS) wants to institute a $10 registration fee for each H-1B visa application. The agency claims that the added money will allow it to better “adjudicate” those applications.

“When DHS creates new USCIS programs through separate rule-makings that require adjudication resources, a fee is necessary to recover the costs of those resources even where the exact costs are difficult to estimate until the program is operational,” reads the agency’s helpful literature on the matter.

Over the past few years, USCIS has been systematically cracking down on various aspects of the H-1B process. For example, the agency recently began asking companies about the type of work that H-1B visa recipients will be doing, right down to vendor agreements, subcontractors, and lists of projects. These requests for evidence (RFEs) have caused much consternation among companies, and may have driven a declining rate of visa approvals.

Since President Trump’s “Buy American and Hire American” executive order, which he signed two years ago, the government has suspended premium processing of H-1B petitions (before resuming it), signaled an intention to kill H-4 EAD, and planned to completely change how the H-1B lottery is run.

As a side effect of these adjustments and orders, the federal government has released lots of information about H-1B applicants, their companies, and even their subcontractors. A recent dataset from the U.S. Department of Labor  shows us who is hiring H-1B visa candidates—including the so-called “secondary entities,” which is a designation given to companies that use outsourcing to bring in foreign talent. (Using that dataset, we also identified that H-1B visa hires are most often identified as “software engineers” or “software developers” by title, which isn’t exactly the “specialty occupation” that the visa was ostensibly designed for.)

Dropping a $10 fee on H1B applicants during the next visa lottery won’t have a material impact on the companies looking to source foreign talent. In fact, USCIS argues that the new registration system, including this fee, will ultimately save some employers money by rejecting their applications before the ultra-expensive later stages (per USCIS’s literature: “…estimated that the H1B registration process will result in an average undiscounted cost savings for all unselected petitioners ranging from $42.7 million to $66.8 million annually…”). Nonetheless, this is yet another example of the federal government tightening the H1B process is all kinds of small ways, as part of its broader attempt to overhaul the system (while keeping at least some of its costs down).