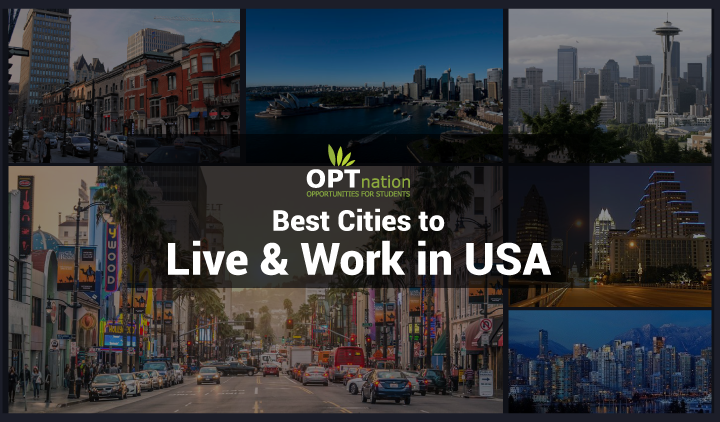 A significant number of international students prefer United States of America for not only to pursue their education but many also stay back and to seek employment opportunities that the country has to offer. H1B visa holders are often on the lookout for cities which are friendlier to the international workers.

Best Cities to Work in USA:-

New York – Between the fiscal years 2010 and 2016 New York City-based employers racked up the most H-1B visa approvals (247,900), according to US government data obtained by Pew Research Center which means plenty of jobs in New York for foreigners. With more than 3 million of the city’s 8.3 million people, or 37%, are foreign-born, New York is also known for its diversity and inclusiveness.

California – California is home to approximately more than 10 million immigrants. California depends on its immigrant workforce more than any other state in the nation as about 60% of computer hardware engineers and software developers are immigrants. So are most electrical engineers, medical scientists and dentists. California is also home to the Silicon Valley and about 71% of tech employees there are foreign born. Therefore California jobs are in demand especially among the immigrants who hold degree in Computer Science. Evidently, it’s an immigrant friendly state. There are plenty of jobs in California City, however, the cost of living in many parts of California can be pretty high.

Chicago – Chicago city has one of the most diverse economies in the country and it is also known as an economic powerhouse for the same reason. There are several major companies that offer H1b sponsored jobs to the people who are looking for job opportunities there, such as, Accenture with over 4,279 H1b employees, Capgemini with over 1,439 H1b employees, JPMorgan Chase with over 1,159 H1b employees etc. The onslaught of entry level jobs in Chicago has also increased in the last few years. It is said that jobs in Chicago city is much higher than other cities.

Jobs for International Students in the USA: –

For international students jobs after graduation hunting can be more complicated than it is for a US student due to the fact that employers will not be aware of your visa requirements and cultural preferences. Therefore, it is important to provide as much information as possible. Here are few steps that you can follow:

Start early! It’s better to start early or at least 90 days before you finish your course because it takes longer for an international student to find a job.

Networking is the key. Attend as many job fairs as you can, talk to alumni groups, CPT internships are another great way to get you ahead of the game. Be aware of the rules and regulations! Stay up to date on your visa process, deadlines, cost etc to get prepared ahead of time.

More than 40,000 companies have submitted H1B visa applications in fiscal year 2016 and Fortune 500 companies have approved most of these H1B jobs petitions. Some the top companies that hire international students and sponsor H1B are:

Cognizant Tech Solutions – Homeland Security in 2016 approved more than 20,000 H1B visa petitions for this company, making it number one on the list. This American multinational corporation offers IT services.

Infosys – With nearly 15,000 H1B visa petitions approved, Infosys comes second on the list. It’s a global leader in consulting and technology that helps clients in over 50 countries.

Accenture – Accenture offers consulting, strategy, technology, digital, and operations services in over 120 countries. It gives opportunity to people to work with companies that hire international students and sponsor H1B jobs.

Around 1.5 million foreign graduates of US colleges and universities between the year 2004 -2016 acquired authorization to work and stay in the country through the federal government’s Optional Practical Training Program (OPT). OPT is a temporary employment, during the period of which undergraduate and graduate students under the F-1 visa program are given permission by the USCIS to works towards getting practical training in their area of study. International Students’ jobs after graduation in the field of science, technology, engineering and mathematics (STEM) fields were approved according to a Pew Research Center analysis of U.S. Immigration and Customs Enforcement (ICE) data.

There are several websites that lists for the firms that have filed for H1B visas in the past. By acquiring a list of companies that have sponsored the H1B visas in the past will help you a great deal to secure a job in the U.S. However, this is only a starting point. A thorough research and guidance is necessary to achieve your aim.