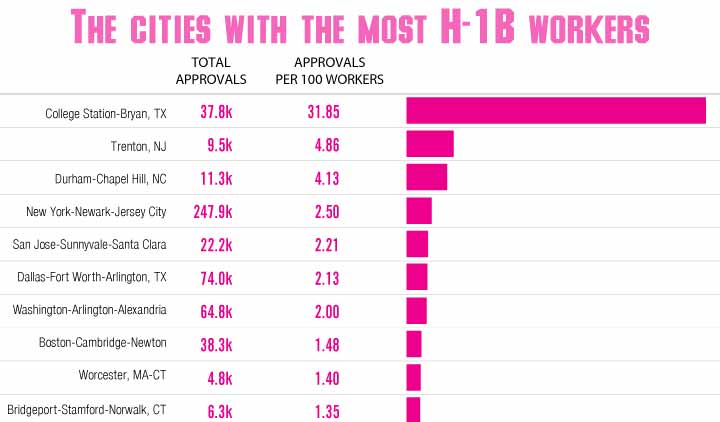 H-1B high skilled visas — the most popular U.S. temporary work visa — are often associated with high level jobs in Silicon Valley tech companies. But College Station, Texas has the highest number of H-1B visa approvals per 100 workers over the past few years, according to a new study by the Pew Research Center of data obtained through the Freedom of Information Act.

Between the lines: Companies located on the East Coast of the U.S. and in Texas actually use the H-1B visas far more than Silicon Valley companies. The large IT company Cognizant is located in College Station, and it files the ninth largest number of Labor Condition Applications (LCA), which are required when hiring workers on an H-1B visa.

Where it stands: United States Citizenship and Immigration Services began accepting this year’s petitions for H-1B visas on Monday.

U.S. degrees: There have been some efforts to retain foreign students who attend American colleges and universities, Pew Research points out. San Diego had the highest percentage of H-1B workers with U.S. degrees at 28%, followed by Gainesville, FL and Oklahoma City, OK (27%); An Arbor, MI (25%) and Greensboro, NC (24%).