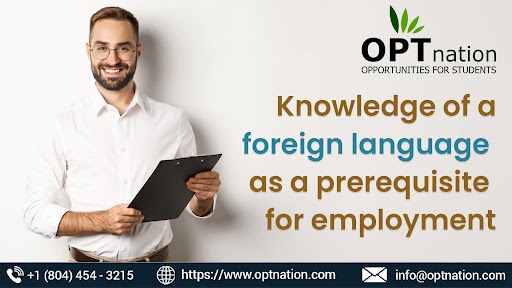 In today’s job market, many employers are looking for employees who can communicate in a foreign language. Individuals with this skill set are increasingly in demand as businesses become more globalized. Although some people may view learning a foreign language as daunting, there are many advantages to doing so, both professionally and personally.

In fact, many employers now consider bilingualism to be a necessary skill for certain positions. But why is this the case? Let’s look at a few reasons why being bilingual can give you an edge in the job market.

1.      Bilingualism Shows that You are Flexible and Can Handle Change

In our ever-changing world, employers are looking for employees who can adapt to new situations quickly and efficiently. If you are bilingual, it shows employers that you are flexible and can handle change well. This is because being bilingual means being comfortable with change and ambiguity – after all, you’ve had to deal with two different languages! As a result, employers know that they can also count on you to be flexible in your work.

2.      Bilingualism Means that You Can Communicate with a Wider Array of People

3.      Bilingualism Demonstrates That You Are Willing to Learn New Things

Employers love employees who are constantly learning and developing new skills. If you are bilingual, it demonstrates to potential employers that you are willing to learn new things – after all, you had to learn an entirely new language! Any employee’s willingness to learn is an essential quality, so being bilingual definitely gives you an edge in the job market.

When companies do business in multiple countries, they often need to communicate with people who speak different languages. In the past, this would require hiring an interpreter.

Bilinguals can communicate directly with people who speak different languages without needing an interpreter. This can save companies a lot of money, as interpreters can be pretty expensive. In addition, communicating directly with someone in their own language can often be more effective. This can help to build better relationships and understandings between people.

Personal And Professional Advantages Of Learning A Foreign Language

Speaking a foreign language can help you advance in your current job. If you can take on assignments requiring international communication, you’ll be more likely to get promoted. And if you ever have the opportunity to transfer to a position in another country, being fluent in the local language will make the transition much smoother.

Having Knowledge of a foreign language makes you creative

It is often said that learning a foreign language can make you more creative. While this may seem like a far-fetched claim, there is actually some scientific evidence to support it.

A study by a team of researchers found that bilingual people are better at solving problems that require creative thinking. The researchers believe this is because bilingualism constantly forces the brain to switch between two different language systems. This process of switching back and forth seems to help people become better at thinking outside the box.

So, if you’re looking for a way to boost your creativity, learning a foreign language may be just what you need. Not only will it give you a new skill set, but it could also help you think more creatively.

It makes You Interesting

Finally, learning a foreign language can simply make you a more well-rounded and interesting person. Being able to converse with people from other cultures can be a profoundly enriching experience. It can also help you better understand your own culture and language. Whether you’re looking to boost your career or simply broaden your horizons, learning a foreign language is a great way to do it.

How to learn a foreign language effectively

One of the most effective ways to learn a foreign language is to immerse yourself in it. If you can, travel to a country where the language is spoken and try to speak it as much as possible. This will help you to pick up the nuances and subtleties of the language much more quickly than if you were just reading a textbook or watching videos.

If you can’t travel to a foreign country, you can take classes nearby you. Try watching movies and TV shows in the language, listening to music, and reading books. You can also find online communities of people learning the same language as you. Practicing with native speakers is one of the best ways to improve your skills.

Employers increasingly value employees who have the ability to communicate in a foreign language. If you are considering learning a new language, be sure to put some thought into which one will be most beneficial for your career goals. French is an advantageous language to learn in that regard. And a practical solution for learning it is taking French classes in your local area. However, Whichever language you choose, the effort you put into learning it will certainly pay off in the long run.