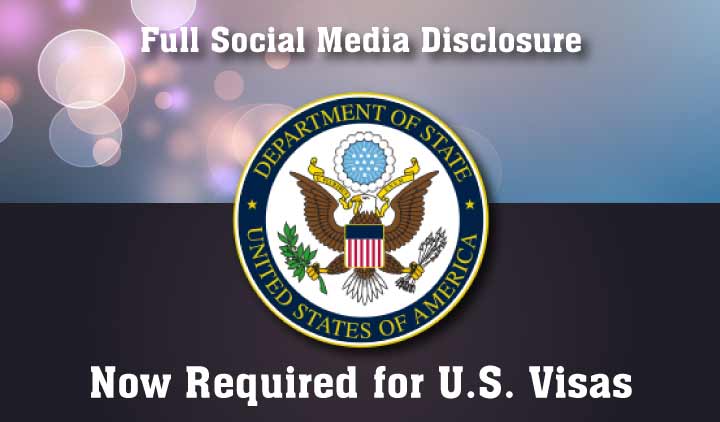 New regulations from the United States Department of State (“State Department”) will require U.S. visa applicants traveling to the U.S. for work or study to submit their account names on a number of social media platforms.

In addition to the social media information, visa applicants must also supply five years’ worth of email addresses and phone numbers, international travel and deportation status, as well as information about any family members who have been involved in terrorist activities. Applicants are also given the option to volunteer information about social media accounts on platforms that are not listed on the visa application form. The State Department will not immediately seek password information but can request it if an applicant is deemed to require additional “vetting.”

Though individuals may feel as though the U.S. government is reaching into their personal lives with these newly imposed regulations, the requirements are actually a step in the direction of less surveillance than what was previously proposed.

In September of 2017, the Department of Homeland Security (“Homeland Security”) proposed regulations that would allow its officers to survey the social media use of all temporary non-immigrant workers, immigrants and even citizens who achieved citizenship through naturalization.

The State Department can collect information including, among other things, personal achievements or milestones, pinned locations, birth dates, and photos. This information can then be compared against submitted information for verification purposes and otherwise to raise inconsistencies.

Applicants for certain diplomatic and official visa types are to be exempt from the stringent new measures.

Prior to these newly adopted rules, only applicants who needed additional vetting were required to hand over this information — this included people who had been to parts of the world controlled by terrorist groups.

Further, travelers have an additional obligation to hand over their passwords to the social media information requested when traveling through a Port of Entry (“POE”), such as a land crossing or flying through an airport. Officers at these POEs can demand that travelers open their social media platforms, emails and other information stored on electronic devices when entering the U.S. without probable cause. Failure or refusal to do so may result in having your device confiscated or being denied entrance to the U.S.

In an official statement, the State Department affirmed that collecting such additional information from applicants will strengthen the process for vetting and confirming their identity while supporting legitimate travel to the U.S.

The emergence and increased use of social media have fundamentally changed the way people communicate and share information. As a result, travelers to the United States should take measures to be as prepared as possible and ensure that the information submitted in their applications is consistent with information available on their social media profiles.