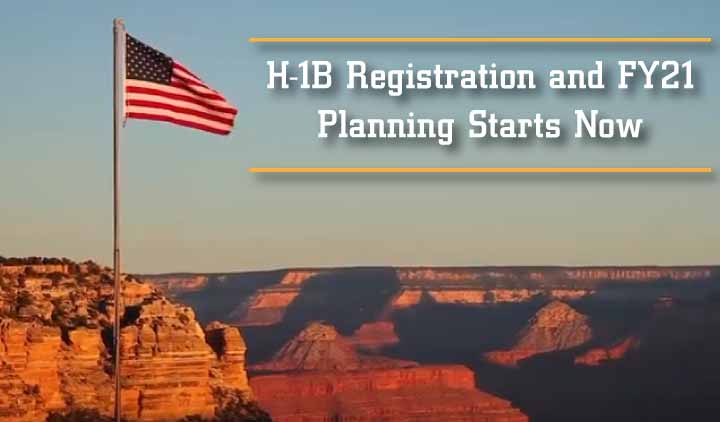 Just as FY20’s H-1B approved cap cases are reaching the October 1 effective date for their authorized period of employment, the Department of Homeland Security (DHS) reminds us that there are changes to the cap lottery process that will impact the FY21 season through its proposal for a $10 electronic registration fee. It may seem too early to be thinking about these FY21 cap filings, which will be filed in April 2020, but the changes require significant pre-planning and registration that should be reviewed and considered by employers well before the launch of the initial registration period expected to begin on or before mid-March 2020. We have all experienced at some point the feeling of a “school year flying by,” so making hiring and staffing decisions that will need to be finalized this winter while watching the leaves change around us no longer seem premature.

Recap of the 2019 Changes and the Suspended Registration Process

Earlier this year, United States Citizenship and Immigration Services (USCIS) announced a final rule to change the H-1B cap selection process in two ways: (1) reversing the order of selection of “regular” cap cases and advanced degree cap cases and (2) imposing a new online preregistration system. The latter was suspended to FY21 due to the timing of the new rule and concerns over completion of user testing and integration of a proper launch of a completely new online registration process within weeks of the start of the FY20 cap filing season on April 1.

On September 4, DHS published a proposed rule requiring Petitioners seeking to file H-1B cap-subject petitions to pay a $10 fee for each registration submitted to USCIS. This fee is designed to offset administrative costs necessary to implement and maintain the registration system, which suggests that the registration system is unlikely to be suspended for FY21. Decisions about H-1B staffing (new hires and change of status for current employees in other classifications) have always required significant advance planning. An H-1B cap petition won’t become effective until October 1, but the full petition will need to be prepared in March of that year so that it can be filed with USCIS by the first few days of April. Although the $10 additional fee when compared to the typical USCIS filing fees of $2,460 (or $3,870 if premium processing is available) may not significantly impact the H-1B hiring decisions, the registration requirement – depending on when the first registration window is set – may require decisions to be made in January or February for potential October H-1B hires.

USCIS will notify Petitioners electronically that their registration was selected and that the Petitioner is eligible to file a complete H-1B petition within a designated filing period of at least 90 days. For those not selected during initial registration, there is still hope. USCIS will keep on reserve unselected registrations for the applicable fiscal year and will select additional registrations from this group in the event it determines it needs to increase the number of registrations for regular or advanced-cap filings in a fiscal year (e.g., selected registrants fail to file petitions, greater number of denials than projected, etc.). USCIS will notify the public once it has received the necessary number of registrations (the “final registration date”), but it could be months before an employer knows for certain whether a registration on reserve has been selected for processing, which could require not only the foresight and business planning to register a potential October hire in January or February, but remaining flexible to learn if you can actually file an H-1B petition and move forward with hiring this person for months until the final registration date is announced.

Other Developments to Remember for FY21

The registration requirement and associated advanced planning is not the only new consideration for FY21. The changes to the public charge rule, due to become effective on or after October 7, 2019, could impact nonimmigrants applying for a change of status in the U.S. who have received some form of “covered public benefits” from an expanded list. Although a preliminary injunction currently prevents USCIS from enforcing the accrual of unlawful presence without a formal finding of a status violation or order issued by an Immigration Judge described in the August 2018 policy memorandum, students seeking a change of status to H-1B should be particularly mindful of confirming that all requirements have been met for maintaining their F-1 status prior to filing a change to H-1B regardless of the status of the temporary injunction.

Employers have always had to plan well in advance for hiring H-1B workers, and seasoned H-1B employers are accustomed to the uncertainty of the cap lottery process every April. This new year will demand even more advance planning, and employers could face more uncertainty with the new registration process and delayed notification of registration selection. For those sponsored workers pursuing a change of status, any prior receipt of government benefits and proper maintenance of student status should be carefully reviewed with qualified immigration counsel to ensure that if their cases are selected and approved, there would not be additional barriers to obtaining H-1B status.