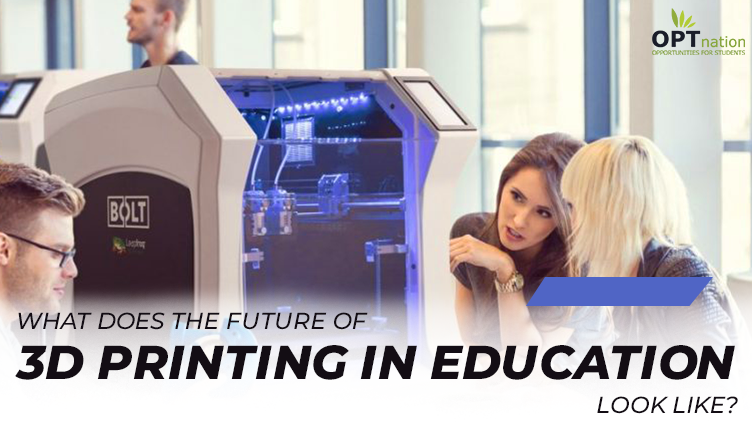 Lately, technology has transformed nearly all aspects of our everyday lives. It has changed the way we work, entertain, communicate, travel… And, inevitably, it has also transformed the way we learn.

Today, traditional learning environments are giving way to innovative approaches that are far more interactive and engaging, and technology is what makes this shift possible. However, at the same time, students still have to deal with standard assignments like essays that remain a staple in academia.

Luckily, innovations have made doing homework easier, too. For instance, one can use laptops and cloud drives instead of pen and paper. Moreover, there is online essay writer help for those who need affordable 24/7 assistance from trained professionals. But of course, the use of technology in education has moved far beyond that.

Currently, there is plenty of tech that is being successfully used in classrooms – and the usage of 3D printers for education is among the most impressive examples. It is also one of the most promising technologies for education in 2022, so let’s look at it more closely.

A Brief History of 3D Printing

The history of 3D printing technology dates back to the 1980s when the first experiments with developing devices for additive manufacturing began. Hideo Kodama, a Japanese automobile manufacturer, is credited as the pioneer of this method. But the first person to patent it was Charles Hull, an American furniture builder.

At the end of the decade, two more people patented similar methods. Thus, the three technologies – SLA, SLS, and FDM – have laid the foundation for the further development of 3D printing.

The technology continued to grow and evolve in the following decades, especially after the emergence of Open Source in 2005, the introduction of the first 3D-printed prosthetic leg in 2008, and the falling of FDM patents into the public domain in 2009.

Currently, 3D printing technology is widely used in such areas as:

Additionally, it is becoming increasingly popular in education because it offers a wide array of learning possibilities.

So, What Are the Benefits of Using 3D Printing In Education?

Nowadays, when technology has become an integral part of the educational process, 3D printing is gaining more and more recognition as a learning tool. It is already being used in secondary and tertiary educational institutions, and the results are impressive, educators say.

According to their testimonials, using 3D printing in the classroom helps students develop such skills as:

But most importantly, using cutting-edge technology in classrooms helps boost student engagement levels. This, in turn, enables students to provide better academic results and prepares them for their future professional careers.

How Are 3D Printers Used In Education Today?

So, how exactly are 3D printers being used for the benefit of the educational system right now? Here are a few examples.

Several years ago, Stephen Elford – Math and Science teacher and a 3D-printing enthusiast – shared some of his students’ stories at a TEDx conference.

The stories included one of a student who had designed and built a fully functional mechanical clock all by himself. It took the said student several attempts, a sleepless night, and a lot of googling, but his passion for the project helped him succeed.

Another story was of an engineering student and an amateur drummer who entered a 3D-printing project competition and went on to design a desktop-sized electronic drum kit. The project was still in the making at the time the conference took place – but the level of engagement was astonishing, the teacher said.

Other examples of implementing additive manufacturing in classrooms include:

10 Common Job Search Difficulties (and How to Overcome Them)

What Skills Does an Online Master’s In Education Give You?

The Possible Future of 3D Printing In Education

That said, the future of 3D printing in education looks brighter than ever. As the devices are getting more functional and accessible, more and more schools are willing to implement them into the educational process. However, there are still some issues that need to be tackled in order to make the technology omnipresent in schools.

As the recent report by MakerBot (the leading 3D printers manufacturer) pointed out, here is what needs to be addressed firsthand:

If all these issues will be addressed in the near future, schools of all levels will get the chance to create a more innovative, engaging, and entertaining learning environment. It will provide students with vital skills for their lives and careers in the modern tech-driven world.

As the data we have indicates, 3D printing is bound to play an increasingly important role in education worldwide. As the devices become more accessible and popular, more and more schools will be finding ways to implement 3D printing technology into the educational process.

However, there still are some issues that need to be addressed before the future that experts envision today becomes a reality. When this happens, a 3D printer will most likely become as familiar to every schoolkid as a traditional printer already is today.