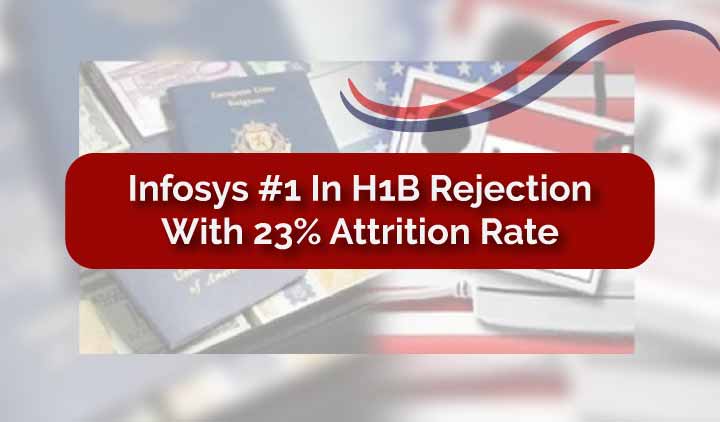 The attrition rate is something all companies are terribly worried about, and there are numerous reasons behind this.

But what might be the reason behind this constantly increasing attrition rate? Industry experts have stated that the strict rules of the H-1B visa is one of the prominent reasons behind this drastically increasing rate of attrition.

We know that IT companies are among the top applicants and these are the ones heavily impacted.

How are the stricter rules of H-1B visa affecting the attrition rate in the Indian IT companies? Find out right here!

As per reports, Tata Consultancy Services, Infosys, Wipro, Cognizant, and the US branches of Tech Mahindra and HCL Tech have together constituted for two-thirds of visa rejections among the top 30 Indian IT companies.

Here are the numbers of the denial rate of the initial and continuing H-1B visa petition, as published by USCIS H-1B Employer Data Hub, National Foundation for American Policy:

Top-30 IT companies, such as Cognizant, Tata, and Infosys have tried to hold on to their workforce through small salary hikes, opportunities to work abroad to retain talent. Cognizant has had 4,338 H-1B visa denied between 2017 and 2018, and this is as much as 32 % of their applications.

Infosys Attrition Rate Highest Ever At 24%

The rules of the H-1B visa have been made a lot stricter than they used to be, which has affected the Indian IT companies hugely.

Infosys is facing the short end of the stick, with a 23.4% attrition rate. This is the highest attrition rate that the company has seen in its entire history.

The company has blamed the H-1B visa denials as the reason behind this increased attrition rate.

Infosys COO UB Pravin Rao said, “We can arrest attrition from expense management but to a large extent, we believe it’s more about giving them opportunities, more about a new narrative around some of these initiatives that we are doing, enabling them on their career progression and so on.”

Infosys is also trying to bring down the huge figure of the attrition rate by introducing incentives, skill training programmes for the employees and other such strategies. Read about Infosys’ efforts to reduce the attrition rate right here.