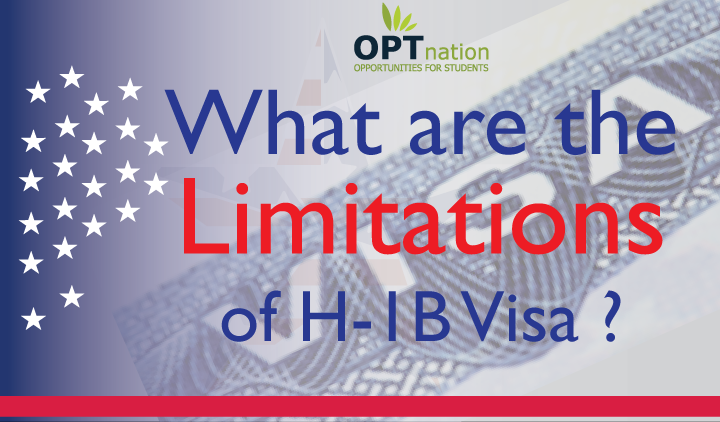 H1B visa is a temporary work visa for US that allow foreign professionals to get employed in the United States. The H1 visa is a great way to hire specialized employees for a limited period initially approved for a period of three years and can be further extended to more 3 years. It is a career opportunity for foreign workers but it also does have its H1B visa limitations and restrictions both for employees as well as employers.

Here are some of the H1B Visa Limitations:

H-1B status is not a permanent status; it is temporary in nature which is valid for 6 years. The initial period for the approval of H-1B visa is for 3 years and can be renewed for another 3 years. Thus adding the time period, the total time duration for the H-1B visa becomes to be of 6 years. After the completion of 6 years, the visa holder needs to leave United States for at least 1 year in order to qualify for the next H1B visa application.

There is a possibility for the holders of H-1b visa to extend their visa beyond 6 years of time span but only under the conditions. The conditions are:

The limit for the H-1B visa quota for those pursuing bachelor’s is 65,000 whereas those pursuing masters is of 20,000. This is the current limitation which can vary with time. For those who are on the F-1visa and are pursuing bachelor’s, if by chance their H-1b visa petition gets denied, they have the chance to apply for H-1B visa through master’s degree. The next level is Ph.D. but after that there is no scope.

Candidates who have filed for the H-1B visa are not permitted to work unless their application is approved by the USCIS. Their employment cannot begin without the permission from the USCIS. If for some reason the candidate already hold the H-1B visa and now wishes to change the employer, then the candidate must wait for the new employer to file the application once again.

The USCIS does not give the children of H-1B visa holders or their spouse to work unless and until their working authority is approved by the USCIS. If the spouse or the children of H-1B visa holder is caught working in illegal manner then it is the violation of law. With the coming of the new law, it is said that their spouse can work from the May of current fiscal year.

As mentioned earlier, H-1B visa is not permanent and gives only temporary stay in USA. Thus, it does not automatically give the Permanent Residency in the lawful manner. If any candidate wants to have the PR then there is a separate which requires to be followed.

It states that any of the party that is either the employer or the employee can resign from the job anytime. There does not need to be any strong proof behind it. Validation of the H-1B visa gets over form the time employee gets terminated from the work. Though the candidate holds the visa, yet technically it would not be valid and neither is useful in fetching another job. As it would be impossible to leave the country very moment of expiration of visa, the candidate is given the time period of 10 days after the employment is over. This is called the grace period where the candidate can search for another job and apply for H-1B visa again with that employer, is he/she wishes to continue their stay in USA.

At any time, the employer can replace H-1B candidate with the US worker. There is no way to fight against this discrimination done by the employer, as the first preference is always given to the native candidates than the international candidate. This discrimination cannot be continued during the working hours of the employee, i.e. the hired employee should get all the benefits equivalent to the US Worker.