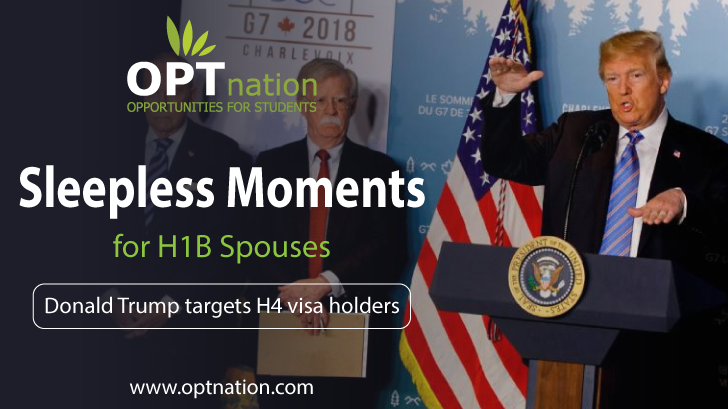 US President Donald Trump has been changing the H1B visa policies for the immigrant foreign students or professionals looking to work in America – at a rapid pace since his election, leaving many of these dreamers with little option and may also to force-exit the country and come back to their homeland. H1B Spouses are on final ‘ Final Clearance Review ‘ for the work permit as H4 EAD by Trump Administration.

US Citizenship and Immigration Services (USCIS) L. Francis Cissna recently proclaimed that he would be happy if the American law prevented the “replacement” of an American by an H1B holder, in terms of jobs.

“I would really love it if Congress would pass a provision prohibiting American workers being replaced by H1B workers. I could draft it myself, probably right now, you know?” he reportedly stated.

With the ongoing changes or reforms in the Trump Administration to win back America for the Americans, the security of a future for Indians in the country looks bleak.

A policy change to strip spouses of H-1B visa holders of their right to work has entered its final review, with senior leaders in the Department of Homeland Security moving toward approval, according to a new court filing.

The Donald Trump government in a court filing dated 20 August has confirmed, yet again, that the proposed rule to revoke work permits of H1B spouses – popularly called H4 EAD – is currently in “final clearance and review” process and officers of the Department of Homeland Security (DHS) are working out the fine print of the terms of approval.

The latest court filing has been made in an ongoing lawsuit Save Jobs USA versus Department of Homeland Security (DHS) which has challenged the H4 EAD almost from the day it came into being back in 2015. The petitioners have pushed harder after the new Trump government came to power. There are two approaches on this filing. One way is to say the needle hasn’t moved and this is exactly the same position the DHS took in April and May – that the clearance and review process is on. On the other side, every time the H4 EAD is mentioned in public records, it sends anxiety levels across the H4 community soaring.

The latest court filing also confirms that the plan to revoke the H4EAD has not reached the Office of Management and Budget. This is what the DHS has said in its Spring Agenda earlier this year: “On February 25, 2015, DHS published a final rule extending eligibility for employment authorization to certain H-4 dependent spouses of H-1B nonimmigrants who are seeking employment-based lawful permanent resident (LPR) status. DHS is publishing this notice of proposed rulemaking to amend that 2015 final rule. DHS is proposing to remove from its regulations certain H-4 spouses of H-1B nonimmigrants as a class of aliens eligible for employment authorization.”

The proposed rule change was set in motion by President Donald Trump’s “Buy American and Hire American” executive order, according to Homeland Security.

Those affected hold the H-4 visa, a work permit for spouses and under-21 children of H-1B workers. It remains unclear if all spouses of H-1B holders will be banned from working, as Homeland Security has only said “certain H-4 spouses” will be targeted by the new rule.

Controversy over the H-4 has spun off from the furor over the H-1B, which is relied upon heavily by Silicon Valley technology companies but attacked by critics over reported abuses.

Homeland Security, which had earlier said it would make the change in February, filed an update in a federal court case on Monday to inform the court that the new rule was in the final “clearance review” and that the department’s intention to impose the ban was unchanged.

Earlier this year, University of Tennessee researchers estimated that 100,000 H-1B spouses would lose their jobs as a result of the new policy, 93 percent of them women from India “who held successful jobs and often advanced degrees in their native country before coming to the U.S.A.” H-1B holders whose spouses aren’t able to work may leave the U.S., the researchers said.

FWD.US, a tech lobby group co-founded by Facebook CEO Mark Zuckerberg and Microsoft founder Bill Gates and others, said in April that the ban would remove tens of thousands of taxpayers from the workforce and could hurt the U.S. economy.

However, the Center for Immigration Studies, which lobbies for reduced immigration, has called the Trump administration’s changes to the H-1B system, including the planned spousal work ban, “small but important steps” toward reforming a system “riddled with abuse and fraud.”

Homeland Security filed the update in the U.S. Court of Appeals in Washington, D.C., in a lawsuit against the department by Save Jobs USA, which sued to permanently ban the department from allowing H-4 visa holders to work.

The three members of Save Jobs identified in the lawsuit each allege they were given notice by Edison of their firings, then had to train their H-1B replacements from Indian outsourcing giant Tata or they would have been denied severance compensation and eligibility for unemployment benefits.