WASHINGTON — More than 700,000 New Jerseyans could lose benefits under President Donald Trump’s proposed rule designed to make it harder for poorer immigrants to get green cards, allowing them to remain in the U.S. permanently.

The new rule, announced Monday and slated to take effect Oct. 15, would target immigrants that receive government benefits such as Medicaid, food stamps or housing subsidies, or are considered likely to do so. In addition, those deemed to need government aid may not be allowed to enter the country.

“We certainly expect people of any income to be able to stand on their own two feet,” Trump’s acting director of Citizenship and Immigration Services, Ken Cuccinelli, said at the White House. “And so, if people are not able to be self-sufficient, then this negative factor is going to bear very heavily against them in a decision about whether they’ll be able to become a legal permanent resident.”

The Migration Policy Institute, a Washington-based research group, estimated that 709,000 residents in New Jersey would be affected. That includes not only non-citizens but American citizens who live with people who are not.

Only five states would have more people affected than New Jersey. Nationwide, the total could be 22.7 million, according to the institute.

Trump earlier proposed cuts to the food stamp program that would end benefits for around 68,000 residents in New Jersey.

The effect of the immigration rule will be to discourage citizens, as well as non citizens, from seeking benefits, said Erika Nava, a policy analyst with New Jersey Policy Perspective, a progressive research group.

Some citizens live in homes with non citizens, some of whom are not in the country legally. By applying for benefits, the citizens could be giving information to a government that has threatened massive raids against unauthorized immigrants, Nava said.

“They’re worried. They don’t want to take a chance,” Nava said. “Under this administration, immigrants fear anything is possible, that everybody is the immigration police.”

Cuccinelli said fears of the so-called chilling effect were unfounded. 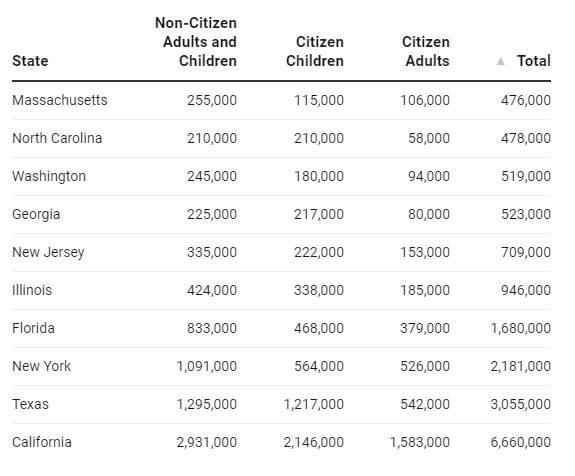