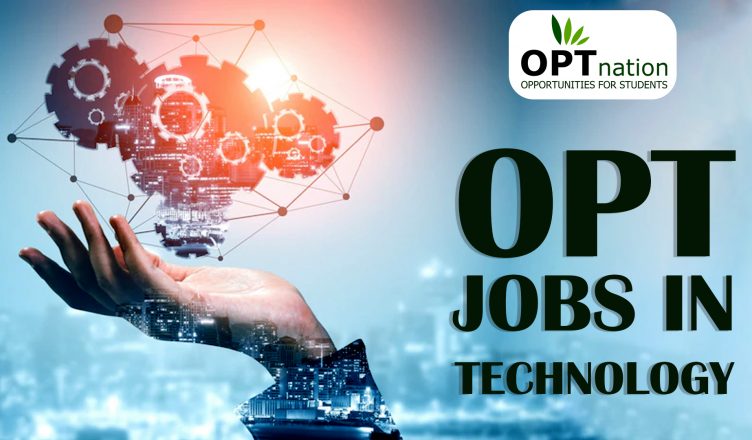 OPT jobs in Technology 2022-23. The IT technician is responsible for maintaining and repairing computers, networking equipment, and other electronic devices. They are usually involve in troubleshooting problems that arise from hardware issues, software errors, and network connectivity. This position requires a high level of technical expertise and knowledge about computer systems.

Network administrators are responsible for managing networks and ensuring their security. They install and configure servers, routers, switches, firewalls, and other networking devices. Also a degree in computer science or information technology is typically require for this position.

Software developers create applications for use by people. They may develop programs using programming languages like Java, C++, Python, or PHP. These programs can range from simple games to complex web-based platforms. Many companies hire software developers through online job boards like www.OPTnation.com

Artificial intelligence (AI) and machine learning (ML) have been around for decades but only recently has their use become mainstream. These technologies can help farmers identify problems before they occur, predict what might happen based on historical data, and make better decisions about how to manage crops. In other words, AI and ML can help farmers do things that were previously impossible.

AI & ML are already being used in agriculture

Today, Artificial intelligence and ME chine Language are already be use across many different agricultural sectors. They’re helping farmers decide where to place irrigation systems, determine the best time to fertilize, and even detect diseases like Fusarium wilt.

AI & ML is going to change the way we farm

As these technologies continue to evolve, they will eventually impact almost every aspect of farming. Farmers will no longer need to spend hour’s manually analyzing data; instead, AI and ML will analyze data and provide insights into the health of crops. This could mean that farmers won’t need to physically visit each plot of land to check on its progress. Instead, AI and ML will take over this task.

Robotic Process Automation is a technology that allows computers to perform repetitive tasks without human intervention. This can include anything from data entry to scanning documents. In this case, we are looking at using RPA to automate the process of harvesting cannabis.

There are many benefits to using robotic process automation. One of the biggest advantages is that it reduces errors and increases efficiency. Another benefit is that it helps reduce costs by eliminating the need for employees to do manual labor.

How does RPA work?

The first step in using RPA is to create a workflow. A workflow is a series of steps that are perform automatically. Once the workflow has been created, it needs to be programmed into the robot. After programming, the robot is able to follow the steps in the workflow and complete the task automatically.

Edge computing is a form of cloud computing that allows data processing to occur at the edge of the network, closer to where the data was collect. This can reduce latency and increase speed.

IoT (Internet of Things) refers to the interconnection of uniquely identifiable embedded devices within the Internet infrastructure. These unique identifiers are call device addresses, and they allow these devices to communicate with each other regardless of their physical location.

Blockchain technology has been around since 2009, but only recently have we started seeing its application in the real world. In this video, we explain what blockchain actually is and how it’s being use.

Quantum computing is a field of computer science that studies computation using quantum mechanical phenomena. In other words, it uses the principles of quantum mechanics to design computers that are faster than their classical counterparts. This technology has been around since the early 20th century, but only recently have we seen a breakthrough in its ability to perform certain tasks.

A qubit is the basic unit of information storage in a quantum computer. They can exist in two states, 0 or 1, much like a bit does in a normal computer. However, unlike bits, they can exist in both at once. This means that a single qubit can store multiple pieces of data.

Quantum algorithms are  solve problems in fields such as mathematics, physics, chemistry, biology, economics, and engineering. These algorithms use quantum properties such as superposition and entanglement to perform calculations.
Superconductors are materials that conduct electricity without any electrical resistance if their temperature drops below a critical point. There are many different types of superconductors, including ceramic, metal organic frameworks (MOFs), and cuprite’s.

Cuprite superconductors were discovered in 1986 by Bednorz and Muller. They are known for having high transition temperatures, making them useful in applications such as MRI scanners.
MOF superconductors were first discovered in 2008 by Yagi et al. They are similar to MOFs, but they have higher transition temperatures. OPT jobs in Technology 2022-23

Virtual reality (VR) is a computer-generated simulation that creates a completely immersive environment where users are able to interact with digital objects and places. VR headsets range from simple cardboard devices to expensive high-end systems. As well as in contrast, augmented reality (AR) is a live direct or indirect view of physical real world surroundings whose elements are superimposed upon a user’s perception of reality.

AR headsets can overlay information over real life scenes and provide a variety of features including spatial awareness, object recognition, and hands-free operation. Augmented reality has been use in various industries including medicine, education, manufacturing, construction, transportation, gaming, and entertainment. One of the earliest uses of AR was in the field of medicine. Doctors could use AR to help them better understand their patients and improve patient care.

They could also use AR to create virtual models of organs and bones to allow doctors to practice surgeries before they happen. Another example of how AR is being used in medicine is through the creation of surgical simulators. Also these simulators are designee to train surgeons on how to perform certain procedures without actually having to do the procedure on a human patient.

This allows medical professionals to learn the techniques needed to perform these operations without putting themselves at risk. as shown above With the rise of smartphones, many people have started using AR apps. Some of the popular ones include Pokémon Go, Google Maps, Snapchat, Facebook Messenger, and Instagram. Many of these apps are free and some even come preloaded on phones.

However, if you want to experience the full potential of AR, you need to purchase a headset like the Oculus Rift or HTC Vie. Both of these headsets cost around $600 but offer a much higher quality experience than other headsets out there. As technology continues to advance, we may soon see AR become a common feature in our daily lives. We might start seeing AR applications in retail stores, restaurants, and even schools.

The blockchain is a decentralized digital ledger that records transactions between two parties efficiently and in a verifiable manner. A blockchain is record information in blocks, where each block can hold multiple pieces of data. This means that the blockchain has no central authority, which makes it safe and secure from cyber attacks.

Why use Blockchain Technology?

There are many reasons why we should adopt this technology into our daily lives. One reason is that it allows us to make trustless transactions without any intermediaries. After that another advantage is that it provides transparency and immutability across all transactions. In addition, it offers a high level of security due to its distributed nature and tamper-proof features.

How does Blockchain work?

To understand how blockchain works, we have to first look at Bitcoin. Bitcoin uses a peer-to-peer network to verify transactions. Each transaction is broadcast to the entire network and verified by miners. Once a miner confirms a transaction, it gets added to the blockchain. This means that once a transaction is confirm, it cannot be reversed.

IoT is a term which describe the network of physical objects that are connect via internet-based protocols. Also This includes devices like smart phones, tablets, smart watches, fitness trackers, thermostats, light bulbs, etc. These devices can collect data from their environment and share this information over the Internet. IoT has been around since the early 1990s, but its popularity grew after the release of Apple’s iPhone in 2007. As shown above all are the types of OPT jobs in Technology. As soon as you can leave your resumes in OPTnation.

Since then, the number of connected devices has grown exponentially. In 2017 alone, there were 2.5 billion connect devices worldwide. IoT allows us to monitor our homes, businesses, and even our bodies. We can use these devices to control our home appliances remotely, check our bank accounts online, and keep tabs on our health.

There are two major types of IoT devices: those that are embedded and those that are not. Also Embedded devices are built into other products, while non-embedded devices connect to the internet through Wi-Fi routers, Bluetooth devices, or cellular networks. The IoT market is expected to reach $14 trillion by 2025. IoT devices generate about 50% of all mobile traffic.