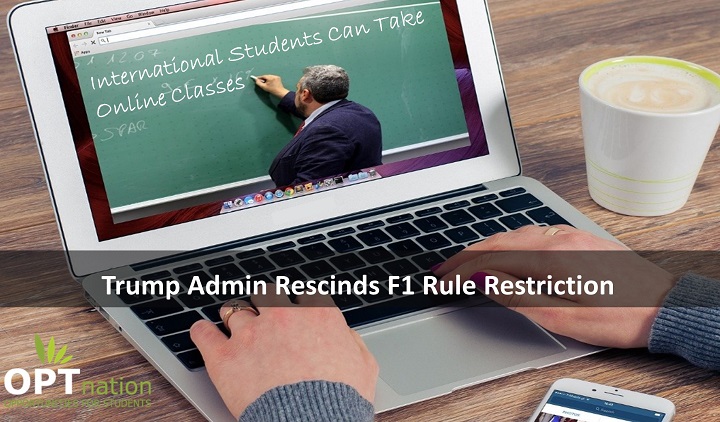 US President Donald Trump has revoked his July 6, 2020 rule that would have stripped visas from many international students if they chose to take online classes amid coronavirus pandemic.

Last week, the US Department of Homeland Security (DHS) had directed Immigration and Customs Enforcement (ICE) to bar international students from staying in America if they attend universities through online classes without any in-person instruction. The order required students to take at least one in-person class, amid the COVID-19 outbreak.

Two days after the policy was announced on July 6, Harvard and the Massachusetts Institute of Technology filed the first of a litany of lawsuits seeking to block it. They were first of several lawsuits seeking to overturn the directive, calling it “arbitrary, capricious, an abuse of discretion”.

Dozens of other universities signed a court brief to support the action.

The Trump administration on July 14, 2020, rescinded a policy that would have stripped visas from international students whose courses move exclusively online amid the coronavirus pandemic.

On Tuesday, minutes before a federal judge in Boston was to hear arguments on their challenge, the judge, Allison D. Burroughs, announced that the administration had agreed to rescind the policy and allow international students to remain in the country even if they are taking all their classes online.

The U-turn by the Trump administration comes following a nationwide outrage and a series of lawsuits filed by a large number of educational institutions, led by Harvard, Massachusetts Institute of Technology (MIT), and later joined by a California public school and a coalition of 17 states.

The announcement comes as a big relief to international students, including those from India. According to a recent report of the Student and Exchange Visitor Program (SEVP), 1, 94,556 Indian students were enrolled in various academic institutions in the US in January.

The government has argued that the requirement that students take at least one in-person class was actually more lenient than the rule that had been in effect for close to 20 years which required foreign students to take most of their classes in person.

But that rule was temporarily suspended on March 13, when Mr. Trump declared a national emergency and campuses across the country began shutting down, with classes moving online.

“If they’re not going to be a student or they’re going to be 100 percent online, then they don’t have a basis to be here,” Kenneth T. Cuccinelli II, the acting deputy secretary of the Department of Homeland Security, said in an interview on CNN after the policy was announced. “They should go home, and then they can return when the school opens.”

Each year, about 1 million international students enroll in American universities. They contribute $41 billion to the economy annually and support more than 458,000 jobs.

In addition to Harvard and M.I.T., the attorneys general of 20 states, including Massachusetts and California, also sued, charging that the policy was reckless, cruel and senseless. Scores of universities threw their support behind the litigation, along with organizations representing international students.

The pressure grew on Monday, when more than a dozen technology companies, including Google, Facebook and Twitter, also came out in support of the lawsuit, arguing that the policy would harm their businesses. Then on Tuesday, 15 Republican members of Congress signed a letter urging the Trump administration to restore its previous policy on international students.

Representative Rodney Davis, an Illinois Republican who had organized the letter, applauded the Trump administration’s “right decision” to cancel its plan. “These hardworking students are the best and brightest from their countries, and they help our communities grow both culturally and economically,” he said.

The administration has also stopped processing green cards for applicants abroad; closed the southwestern border to nonessential travel, allowing only Americans and legal permanent residents to enter while barring asylum seekers; and banned the entry of thousands of foreigners on work visas.

The universities said in their court challenge to the latest policy that “by all appearances,” the government’s attempt to force international students to study on campus had also been a political move, calculated to advance the Trump administration’s agenda to force universities to reopen their gates with in-person classes.

They said forcing students to return to their home countries would in many cases separate them from families in the United States, returning them to places where they no longer had a home. In some cases, they would be living under the thumb of repressive regimes, which policed or restricted internet access.

In court filings, universities said that some arriving students already had been barred from entering the country by immigration officials at airports who told them that their institutions were going online.

After the announcement on Tuesday that the policy had been rescinded, university officials praised the decision and warned that they would be prepared to go back to court should the administration make any further moves to restrict the ability of international students to study online when necessary.

“This is a significant victory,” Harvard’s president, Lawrence S. Bacow, said in a statement. “The directive had disrupted all of American higher education. I have heard from countless international students who said that the July 6 directive had put them at serious risk. These students — our students — can now rest easier and focus on their education, which is all they ever wanted to do.”

International Students in the U.S. under Coronavirus Outbreak

L.Rafael Reif, president of M.I.T., said the swift opposition was evidence of “the important role international students play in our education, research and innovation enterprises here in the United States. These students make us stronger, and we hurt ourselves when we alienate them.”

U.S.C., which led a coalition of 20 universities and colleges on the West Coast that sued the government, said its international students “deserve the right to continue their education without risk of deportation.”

After the announcement of the now-rescinded policy this month, international students had begun scrambling to figure out the next steps. Some said they booked flights home. Others held out hope that their colleges might add classes with an in-person component to enable them to remain in the United States.

“It seems this administration has no concern for international students beyond our wallets,” said Willow Cai, who is studying cinema at the University of Southern California.Credit…Willow Cai

Willow Cai, a rising junior at U.S.C. who is from China, said she had rushed last week to register for a golf class to ensure she had an in-person class. After hearing the administration had rescinded the new policy, she expressed relief and outrage at the government’s initiative.

“All we want is to continue our education in peace during a global pandemic,” she said on Tuesday in Los Angeles. “It seems this administration has no concern for international students beyond our wallets.”

Alexander Auster, 22, a second-year student at George Washington University Law School from Berlin, had already signed a lease on an apartment for the next academic year when the policy was announced. He had arrived in the United States when he was 17 to join the university’s varsity swim team.

“It feels really good now,” he said after hearing that the government had walked back its plan. “Now I am hopeful and optimistic. I thought I had to go home.”

An analysis of the government’s earlier order by Moody’s Analytics found that it could have had a serious economic impact. According to NAFSA: Association of International Educators, three jobs are created for every seven international students. In the 2019-20 school year, there were over 1 million international students enrolled in the United States, which would translate to almost half a million jobs. “ICE’s policy would put many of those positions at risk,” Moody’s Analytics said.

College towns are heavily dependent on international students for their economic well-being, and the Partnership for a New American Economy and the American Enterprise Institute estimates that every H-1B visa, a foreign worker visa, leads to two jobs being created.