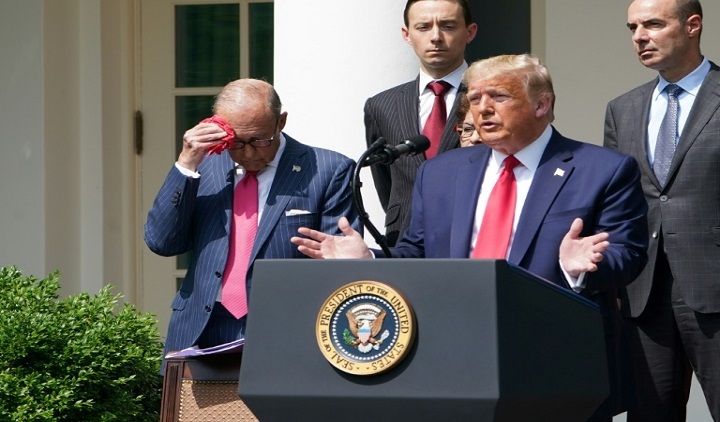 Donald Trump, on June 5, 2020, said that “This is outstanding, what’s happened today,” after the release of the jobs report. “Now, they thought the number would be a loss of 9 million jobs, and it was a gain of almost 3 million jobs…  I think it was incredible in a couple of ways. Number one, the numbers are high, and this leads us to a long period of growth. We’ll have the greatest – we’ll go back to having the greatest economy anywhere in the world. Nothing close.”(Emphasis added.)

Trump predicted that the economy would continue to grow.

Chief economic advisor Larry Kudlow made similar statements. He said, “And I think we’re going to have a very good upcoming few months, you’re going to have a very good August, a very good July, but a spectacular – maybe spectacular September, but a spectacular October, November, December. And next year is going to be one of the best years we’ve ever had, economically. And if you look at the numbers, they bear it out.” And on June 10, 2020, Senate testimony Treasury Secretary Steven T. Mnuchin said, “We remain confident that the overall economy will continue to improve dramatically in the third and fourth quarters.”

The President’s remarks on the “spectacular” growing economic months and “one of the best years we’ve ever had, “contradict the present a significant legal and policy contradiction: about the immigration restriction. The question arises why does the Trump administration need to use executive actions to override laws passed by Congress and enact the national emergency immigration measures when the   President said that the U.S. economy is booming and shall grow rapidly as it roaring back with the jobs?

Jonathan Wasden, a partner with Wasden Banias, LLC, argued successfully against regulatory overreach by the Trump administration in ITServe Alliance v. L. Francis Cissna. saying, “If the prognosis for the economy is so good, then there is no national emergency.”

Possible emergency measures include using the President’s authority under section 212(F) Of the immigration and nationality to block entirely, suspend or impose more stringent conditions including more fees or salary requirement including new fees or salary requirements, on the entry of H-1B and L-1 (intracompany transferees) visa holders. The administration also may suspend, eliminate, or restrict through regulation Optional Practical Training (OPT) and the ability of H-1B spouses to receive employment authorization documents. OPT allows international students to work in the United States, usually after graduation, and is considered essential by employers and U.S. universities to attract and retain foreign-born talent.

The administration is likely to impose new rules on the foreign nationals inside the country with interim final regulations, which may come into effect immediately. Section 212(F) can be used to block “entry” as done on April 22’ 2020 that suspend the entry of new immigrants. (H-1B visa holders and international students are temporary visa holders, not immigrants.) It is also reported that section 212(F) is used by Trump administration more than any other president in the past, and in ways critics say go beyond the statute. (See here.).

Wasden in an interview said that “Section 212(F) is all about emergency powers and if the outlook of the future economy is so positive as stated in the President’s remark than there is no emergency on the horizon that we need to be protected from by using the power under 212(F).”

William Stock of Klasko Immigration Law Partners also believes the administration might be overusing the Section 212(f). “One question a court will have to answer in current challenges to April 22, 2020, proclamation limiting the immigration of family members, and to any expansion to temporary visa holders, is whether delegating the president the power to nullify the remainder of the Immigration and Nationality Act is constitutional,” said Stock in an interview. “In reviewing the third version of the president’s first travel ban, the Supreme Court took pains to emphasize the extreme deference to presidential determinations of potential ‘detrimental’ entry that were embodied in Section 212(f).”

Stock and George Mason University law professor Ilya Somin believe that judges need to address whether in giving the President the power to rewrite immigration law unilaterally, Congress violated the nondelegation doctrine, which limits how much Congress can delegate its powers to the executive. “If the Supreme Court is serious about nondelegation, it will eventually have to either strike down Section 212(f), interpret it more narrowly, or create what would be an ad hoc exception to nondelegation rules for immigration policy,” said Somin.

Wasden said the President’s recent remarks on the economy also make it questionable for the administration to argue in court if it needs to impose new H-1B or other rules as interim final rules. “An interim final rule on H-1B, including a change to the definition of a specialty occupation, would be hard to prove is an emergency need, which is the reason a rule would be interim final and not go through the normal notice-and-comment rulemaking process,” “The definition of H1B occupation has been the same for 30 years. Why all of a sudden does it need to be changed, particularly after the President declared jobs are coming back and each month will be better than the next?” said Wasden.

While the Trump administration is celebrating the launch of SpaceX rocketship, the Trump officials have imposed new immigration restrictions on H1B Visa holders and international students. The PM’s remarks on jobs and the U.S. economy contradicts the national emergency he has asked for. Elon Musk, who founded SpaceX, came to America as an international student and later obtained a work visa

Would he and other innovators survive today the gauntlet of orders, rules, and proclamations the Trump administration is unleashing against the foreign-born?