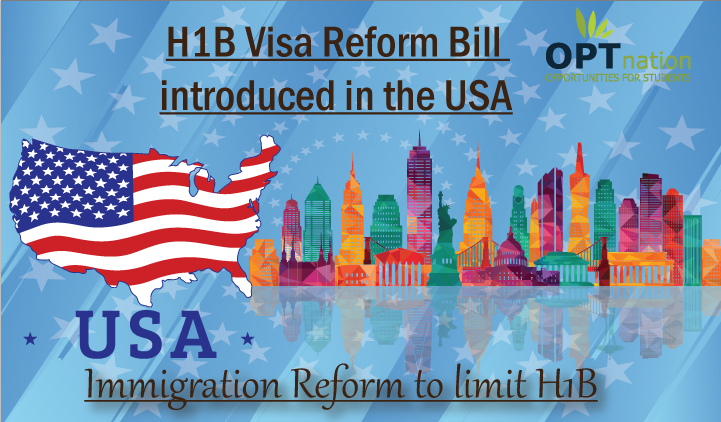 As Donald Trump is President of the United States, many in the tech community were wondering what changes (if any) will come to the H-1B program. The H1B non-immigrant work visa program is once again on the political stage, as presidential leadership in the US is now changing. The wait is over and some actions have taken on H1B visa policy. President Trump stated that he wants to impose restrictions on the H1B program to limit its use as a “cheap labor program”. So there are some H1B reform introduced recently in USA.

The majority of H1B work visas are given to Indian IT workers, basically through outsourcing firms however this is currently in danger of eliminating the avenue for granting H1b work visas.

Every year, there are about 65,000 H-1B visas that Indian techies seek out to work in the US. Current visa norms states that H-1B visa holders should be hired at a minimum wage of $60,000 per year which was established in 1989 and has since remained unchanged. But there are new immigration reform bills that have been introduced in the month of January 2017.

The H1B reform bill was introduced on 4th Jan in the U.S. by two Congressman Lawmakers who claim that it will help crack down on abuse and ensure that these spots remain available for deserving talent from around the world. The Bill, among other points, also states the increase in minimum salary of H-1B visa to $100,000 per annum and eliminates the Master’s degree exemption.

“The legislation we’re introducing today does both. It will ensure that our valuable high-skilled immigration spots are used by companies when the positions cannot be filled by the existing workforce.” Issa, one of the lawmakers who initiated the Bill, said.

Another H1B reform bill introduced on 30th Jan. Legislation has been introduced in the US House of Representatives which among other things, calls for more than doubling the minimum salary of H1B visa holders to $130,000 per annum.

But the doubling of this minimum salary minimum wage of $60,000 means that the number of people who go there will be lesser. The impact will be on Indian and American companies hiring foreign workers.

The legislation sets aside 20 per cent of the annually allocated H1-B visas for small and start-up employers (50 or fewer employers) to ensure small businesses have an opportunity to compete for high-skilled workers, while still protecting against outsourcing.

You can also check for:

It among other things removes visa hurdles for students and other temporary visa holders by building a bridge from F-1 student status to Lawful Permanent Residence and removes paperwork burdens by streamlining H1-B filing requirements and reducing administrative costs.

“It offers a market-based solution that gives priority to those companies willing to pay the most. This ensures American employers have access to the talent they need, while removing incentives for companies to undercut American wages and outsource jobs” said Lofgren.

In related development, Senator Sherrod Brown has announced to introduce L-1 Visa and H1B Reform Act in the Senate which he said would close loopholes in the H1-B and L-1 visa programs and provide increased protections for both American workers and visa holders.

Under the H1-B and L-1 Visa Reform, the Department of Labor (DOL) and the Department of Homeland Security (DHS) would have additional oversight authority to investigate fraud and abuse as well as to increase penalties for companies that violate the bill’s requirements.

“We need to crack down on the fraud and abuse that allows corporations to avoid paying Americans fair wages and exploit foreign workers,” said Brown.

If the legislation is passed, it will become very difficult for various companies in the US to use H1-B visas to hire foreign workers, including IT professionals from India. President Trump’s push for companies to invest and hire American employees in the U.S. is the central factor for reshaping immigration.