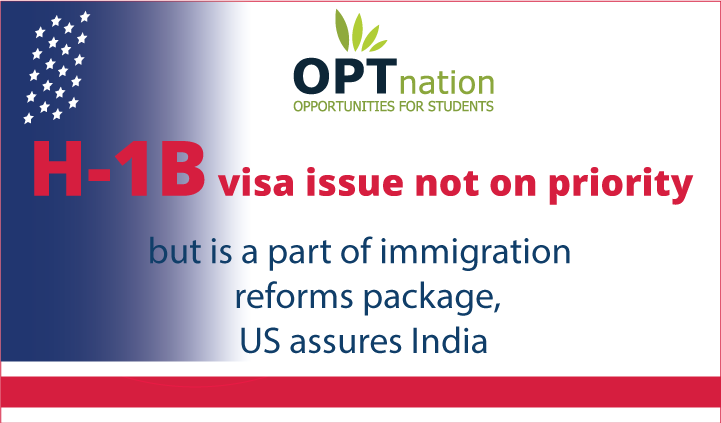 The US has assured India that the H-1B visas issue was not a priority for it and would be part of the larger immigration reforms package that the new Trump administration is working on.

The assurance came during an ongoing debate in the US and reported moves by the Trump Administration to bring out an executive order to curtail the use of H1B visas.

“There was a sense that there is recognition of the contribution of the Indian tech sector. Certainly this is not very much…not a priority of the government. They are concerned with the immigration issue…most of the issues are quite different,” visiting commerce secretary Rita Teotia told reporters at a news conference in Washington.

“Nevertheless when it is addressed, it would be part of the overall immigration package,” Teotia said. Teotia, along with foreign secretary S.Jaishankar, is currently in the US meeting top officials of the Trump administration and the Congressional leadership.

India has been strongly taking up the case of H1B visas issue with the Trump administration.

<<Start Your Job Search Now by Registering with OPT Nation >>

During their meetings with the top administration officials, including commerce secretary William Ross, Homeland security secretary John Kelly and with the Congressional leadership, the visiting Indian officials conveyed that H-1B is a “category of trade and services” which actually helps American economy to be more competitive.

“If the Trump administration’s intention is to bring back American companies to America and attract more foreign investment in America and therefore have more growth in the near term, then it was important growing America remains competitive. So, there would actually be (a) growing need for this partnership,” Jaishankar said.

He noted that H1B visas issue was a trade and business issue and not an economic issue, even though in the US context it was seen as part of the immigration basket.

In his first address to the US Congress, Trump seemed to have softened his stance on immigration by establishing the US immigration towards a merit-based regime as Trump’s call for the “merit-based immigration system”.

“What I would remind you that the President himself in his address to the Congress preferred a merit-based approach to the subject. We heard across the board a lot of respect expressed for Indian skills in the United States,” Jaishankar said.

“We have certainly made our point quite forcefully both in the Congress and the administration. We believe it has been met with a degree of understanding,” he said in response to a question.

And the H-1B reform bills are also introduced in the USA to impose restrictions on the H1B program and crack down the H-1B visa abuse. After the bill is introduced H1B visa holders are worried if they will be able to renew their H-1B visa. Some visa holders in the US are looking for options in other countries like Canada, Australia or even move back to India or other regions in Asia.