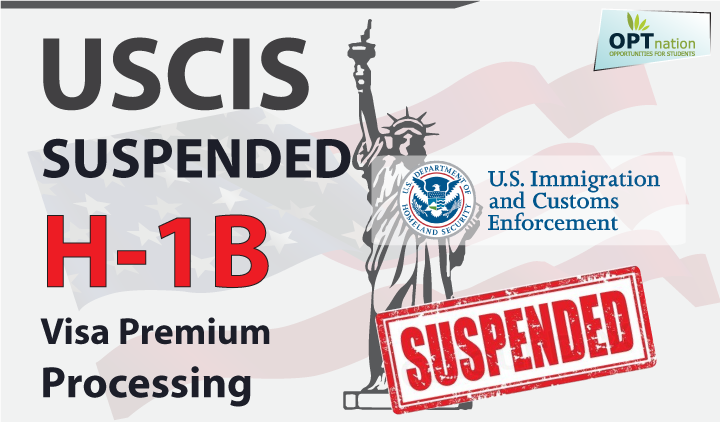 The Trump administration announced on March 3rd, 2017 that the USCIS would temporarily suspend the expedited ‘premium processing’ for H-1B visa applicants in the United States. The suspension will be effective from April 3rd, 2017, and could last up to six months, according to USCIS.

U.S. immigration authorities said temporary suspension will free them up to sift through a backlog of long-pending applications.

By temporarily suspending premium processing, the USCIS has said that it will be able to process long-pending petitions, which they have currently been unable to process due to the large number of incoming petitions and prioritize adjudication of H-1B extension of status cases that are nearing the 240-day mark.

The H-1B visas are widely used by Indian IT majors. “This temporary suspension will help us to reduce overall H-1B processing time,” the USCIS said.

H-1B premium processing is done at a fee of $1,225 premium where H-1B visa application is processed within 15 days, whereas a standard process takes three to six months. Companies submitting applications for H-1B visas for potential employees pays extra for premium processing so as to expedite the visa approval process. H-1B visas are largely used at big IT technology companies that sponsor H-1B visas to bring best talents and skills to their workforce.

The H-1B program currently allows 85,000 per year to enter on the visas, but the process can be slow, and many choose to accelerate it by paying extra for a 15-day expedited process.  The number of total H-1B visa holders is constantly increasing and the number of people seeking such amendments is also increasing especially; last two to three months especially after Trump administration came to action.

Read More: What H-1B reform bills are introduced in the US to crack down on H-1B abuse?

Who Will Be Affected by the Temporary Suspension of H-1B Premium Processing?

The U.S. Citizenship and Immigration Services (USCIS) announced that it would start accepting the H-1B visa applications for the fiscal year 2018 beginning October 1, 2017, from April 3. H-1B visas applicants must apply six months before their start date.

H-1B premium processing suspension is a temporary process to all H-1B petitions filed on or after April 3, 2017.

Since cap-subject H-1B petitions cannot be filed before April 3, 2017for the Fiscal Year 2018, this suspension will apply to all petitions filed for the FY18 H-1B. The suspension also applies to petitions that may be cap-exempt.

While premium processing is suspended, we will reject any Form I-907 filed with an H-1B petition. If the petitioner submits one combined check for both the Form I-907 and Form I-129 H-1B fees, we will have to reject both forms.

We will continue to premium process Form I-129 H-1B petitions if the petitioner properly filed an associated Form I-907 before April 3, 2017. Therefore, we will refund the premium processing fee if:

This temporary suspension of premium processing does not apply to other eligible non immigrant classifications filed on Form I-129.

How will it impact Employers?

Employers are going to be the most affected and would have a tough time managing and hiring foreign workers. An employer extends a job offer, alongside an H-1B visa sponsorship, to a worker, ahead of the April 1 rush. With the premium processing, they could know if their petition was likely to be accepted or they could start planning the onboarding accordingly. And If the visa was likely to be denied, they could start recruiting a new candidate. But now, they’ll have to wait in line, like everyone else and wait for the approval for months. So, the employer might not know until September whether their employee will be authorized to work or not.

The new delay does mean a little more uncertainty for some workers, particularly those who are on the edge of losing their current visa status. Now the thought is focused on deciding whether they should request for new extension process or not.

Now the employers might be more reserved to hire foreign workers as now hiring a domestic worker is now the more practical choice.

This will not only affect new workers coming to the country on the H-1B program, but those who already hold an H-1B visa and are changing jobs within the country too, says Watson. An example would be an engineer who had an H-1B visa with Microsoft taking a new position at Google.

Even if the H-1B premium processing is suspended, petitioners have a chance submit a request to expedite an H-1B petition in urgency if they meet the Expedite Criteria by USCIS listed below:

It is the petitioner’s responsibility to prove that they meet at least one criterion and also encourage submitting documentary evidence in support of their request. USCIS will review case by case and requests are granted at the discretion of the office leadership.

This H-1B premium processing suspension would show whatever result the reason for suspending the expedite process is to clear the backlog of pending foreign high-tech worker visas. President Donald Trump in their campaign promise to crack down abuse on H-1B visas and prioritize American workers in the US for which he took actions like this suspension announcement and also initiated merit based immigration in the US.