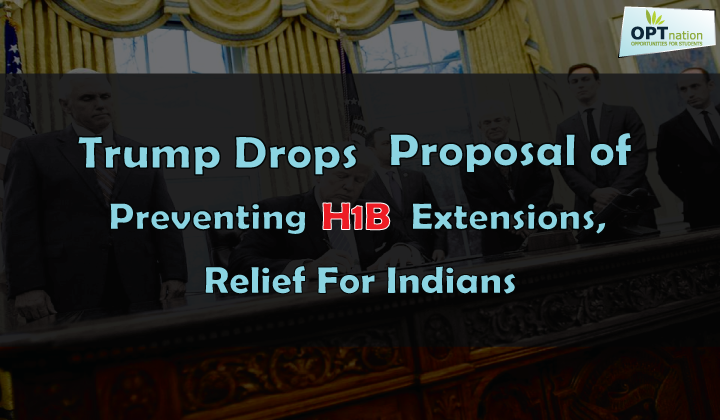 In a breather for foreign tech workers, particularly Indians, the Trump administration on Monday announced it was not considering any proposal that could force deportation of hundreds of thousands of H-1B visa holders by denying them extensions beyond the maximum permissible period of six years, as they waited for permanent residency.

“…USCIS is not considering a regulatory change that would force H-1B visa holders to leave the United States by changing our interpretation of section 104(c) of AC-21, which provides for H-1B extensions beyond the 6 year limit. Even if it were, such a change would not likely result in these H-1B visa holders having to leave the United States because employers could request extensions in one-year increments under section 106(a)-(b) of AC21 instead,” said Jonathan Withington, Chief of Media Relations at US Citizenship and Immigration Services (USCIS), the agency that oversees H-1Bs, in a statement to Hindustan Times.

“The agency is considering a number of policy and regulatory changes to carry out the President’s Buy American, Hire American Executive Order, including a thorough review of employment based visa programs,” he added.

The announcement came as a major relief to Indian H-1B holders waiting for their Green Cards who were at risk of deportation if a proposal seeking to end the granting of extensions to visa under this programme had been accepted.

Immigration Voice, an advocacy group campaigning for a better deal for H-1B workers, mostly from India, was the first to flag the development. “We are ECSTATIC to share this Breaking News,” it said in a post on its Facebook page and claimed that it had succeeded “in protecting its members and getting USCIS to change its policy regarding H-1B renewal.”

It added: “USCIS has announced to us that it is retracting its policy to deny all H-1B visa through (beyond) year 6 based on section 104. This is a GREAT development. And we thank USCIS to make (for making) the right decision.”

The proposal, in the form of an internal memo circulated in the Department of Homeland Security (DHS), which oversees USCIS, sought to end the provision of granting extensions to H-1B visa holders whose applications for permanent residency (Green Card) had been accepted.

An estimated 500,000 to 750,000 Indian H-1B visa holders could have been deported if the administration had decided to go ahead with the proposal, which is in line with President Donald Trump’s “Buy American, Hire American” vision to boost manufacturing and protect local jobs in the US.

“If implemented this could lead to large scale deportations, mostly of Indians, throwing hundreds and thousands of families into crisis,” an official of Immigration Voice official had earlier told Hindustan Times.

The plan triggered panic through the community of H-1B workers from India, a large number of whom are employed with some of America’s top IT companies such as Microsoft, Facebook and Google. Green Card which sometimes sponsor key employees for Green Cards.

Indian IT companies operating in the US, such as Infosys, TCS and Wipro , do not typically sponsor their H-1B employees for Green Card. They send them back to India at the end of the maximum stipulated period of 6 years allowed on this visa type.

For Indians, that wait could stretch for years, given the massive backlog caused by the system of per-country annual cap on the number of permanent residencies. By one estimate it would take an Indian 70 years to get there the current rate of clearance.