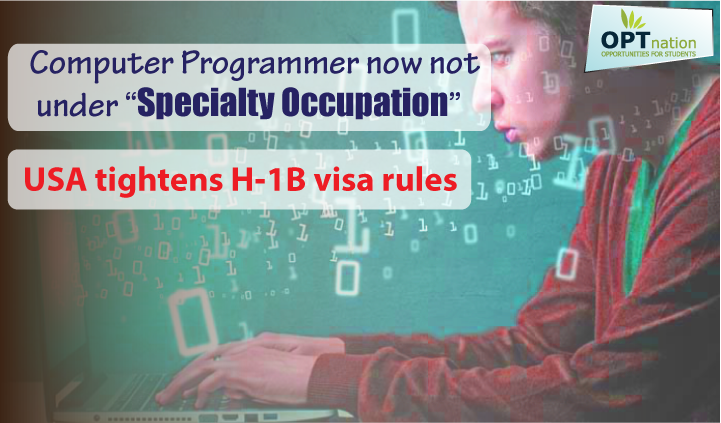 The US Citizenship and Immigration Services (USCIS) have ruled that an entry level computer programmer position would not generally qualify as a position in a “specialty occupation”.

The United States has raised changes to the existing H-1B visa regime to bar the H-1B visas for hiring computer programmers and warned employers against using the visa programme to discriminate against American workers.

The US has ruled that being a simple computer programmer would no longer qualify as a specialist profession, which is a must issue of H1B work visa holders and employers hiring H1Bs.

Policy Memorandum with new Guidelines: Computer Programmer may not be eligible for H1B work visas

The U.S.C.I.S has released a revised set of H-1B guidelines what constitutes a “specialty occupation” superseding and rescinding its previous guidelines of December 22, 2000 was issued by the USCIS through a new policy memorandum on 31 March 2017, which will hit entry-level ‘software programmers’ and IT companies applying for work visas this H-1B season, which opened Monday.

In a March 31 policy memorandum, the USCIS said a computer programmer with an ability to use IT skill will not be sufficient. A petitioner “must provide other evidence to establish that the particular position is one in a specialty occupation”.

The document says a previous guiding policy for H-1B visa petitions from year 2000 will no longer be on hold. These changes are made as the guidelines over the weekend to prevent US-based multinationals companies and H-1B dependent employers from using these visas to hire computer programmers. These changes could target many outsourcing companies in US, who typically employ lower-paid, lower-level computer workers on H-1B Visa.

Companies applying for H-1B visas for computer programmer or coders’ positions will have to submit additional evidence presenting that the jobs are intricate or specialized and require professional degrees. Entry-level wages attached to these visa applications will also get more scrutiny.

And on Monday(April 3), when the U.S.C.I.S started accepting H-1B visa applications for 2018 cycle, the justice department issued a stern warning to employers on using the high-skilled H-1B visa programme to differentiate against local workers.

“The Justice Department will not tolerate employers misusing the H-1B visa process to discriminate against US workers,” said Acting Assistant Attorney General Tom Wheeler of the Civil Rights Division in a statement.

“US workers should not be placed in a disfavored status, and the department is wholeheartedly committed to investigating and vigorously prosecuting these claims,” he added.

The justice department said in a statement that anti-discrimination provision of the Immigration and Nationality Act (INA) “prohibits employers from discriminating against US workers because of their citizenship or national origin in hiring, firing and recruiting”, and added, “Employers violate the INA if they have a discriminatory hiring preference that favors H-1B visa holders over US workers”.

The US has just begun accepting H-1B visa applications for Fiscal Year 2018 from April 3. Every year US approve process for 85,000 applications, with 20,000 of them being reserved for those with H-1B Master’s Exemption. As the policy change has been introduced last minute, companies may challenge the new rule, saying sufficient notice was not provided to them.

One of the H-1B visa programme’s chief critics is Attorney General Jeff Sessions, whose department issued the Monday warning with the threat of “investigating and vigorously prosecuting these claims” of Americans being displaced.

The critics have also targeted Indian IT and MNC companies such as Infosys, Tata Consultancy Services and Wipro accusing them of “gaming the system” by cornering a large portion of the annual disbursement of H-1Bs with a large number of applications.

Many tech companies rely on the H-1B program to bring in workers with special skills and these H1B dependent employers could have a say when the rules changes. This is likely to impact all entry level H-1B visa holders working with IT companies. This may also impact future scope of entry level programmers who were looking to be hired by IT tech startups in the USA.

The US with the U.S.C.I.S has tightened their rules for H-1B visa process with the stance of cracking down on misuse of H-1B visas with tighter norms.