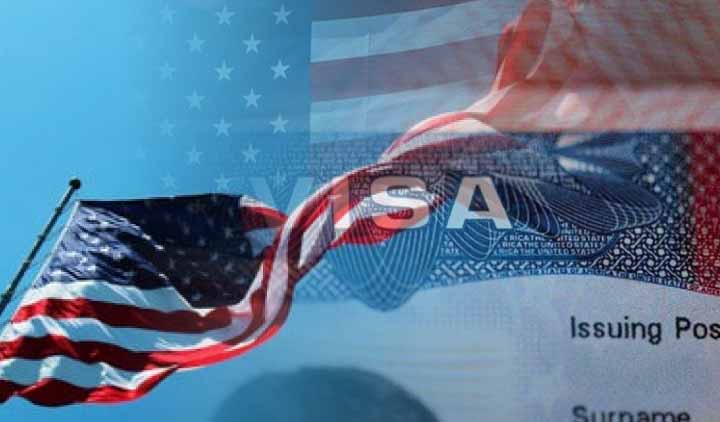 The move to restrict H-1B visas by successive American governments has led to several US-based multinational companies (MNCs) shifting highly skilled jobs to countries such as India, China and Canada, according to a research paper by an academic.

For every three visa applications that were rejected, US companies moved one job offshore over the last decade and half, as they looked for talent in high technology areas, said the paper by Britta Glennon, an assistant professor at the Wharton School of Business at the University of Pennsylvania.

Glennon studied data of H1B visas issued since 2004, when the US began restricting the number of such visas to be issued to 65,000. The curbs have only become more stringent since President Donald Trump took office in 2016.

Indian nationals account for 70% of the work permits issued by the US to high technology professionals. “Limiting skilled immigration – through restrictions on H-1B visas – prompted US multinational firms to go offshore; when these firms couldn’t hire the skilled workers they needed at home, they simply hired them at their foreign affiliates instead,” Glennon told ET. “They also opened more foreign affiliate offices abroad in response to the H-1B restrictions.”

“The effect is strongest among R&D-intensive firms in industries where services could more easily be offshored,” the paper noted. 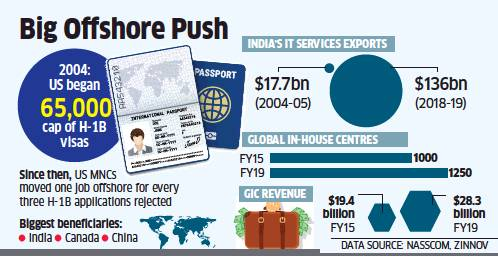 Currently, over a third of India’s $136-billion IT services exports comes from MNCs with global in-house centres or captive centres, according to data from Nasscom, the industry lobby.

The number of people employed by these global in-house centres (GICs) in India has risen sharply to almost a million people in FY19 from 7.45 lakh in FY15, according to a joint study by Nasscom and technology researcher Zinnov. The number of GICs in India has also increased to over 1,250 in FY19 from about 1,000 in FY15, with market size rising to $28.3 billion from $19.4 billion over the same period, the study found.

Companies that are fighting to be innovative and build new products to stay ahead of the competition have no option but to move work offshore, said Sukanya Roy, director at Zinnov.

“Limitations in visas and travel constraints within service providers and partners make it difficult for the larger set of team members to travel and create this domain expertise… This has created a situation where global companies are realising that offshore centres not only enable them to nurture the talent and ensure retention, but also retain core work in-house,” she said.

In an interview this week to [email protected], the business school’s publication, Glennon said, “I suspect that even firms who haven’t offshored yet are now considering doing so as H-1B policies get more and more restrictive. And under the current administration they have gotten much more restrictive.”

The Trump administration, which has increased restrictions on the H-1B visas, has also changed rules that prefer those who have earned a Masters in US universities for the work visas. India’s big four software services exporters – Tata Consultancy Services, Infosys, HCL Technologies and Wipro – have seen around half of their work visa applications getting rejected in the past year as the Trump regime pushed for more employment and higher wages for American workers, according to National Foundation for American Policy (NFAP), ET had reported on August 10.