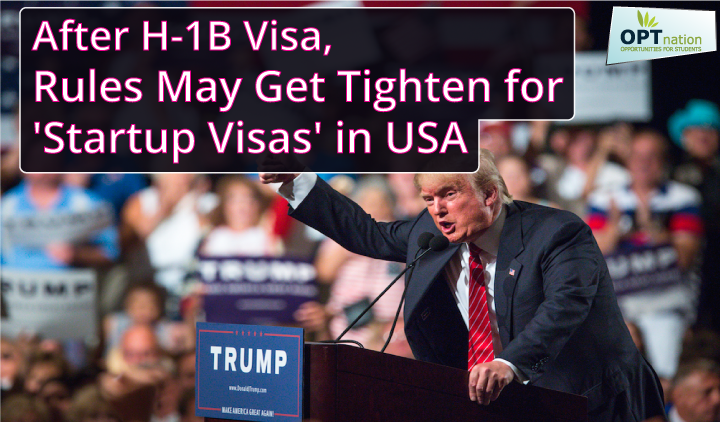 The Trump Administration has been making all the efforts to tighten the immigration flows to the country.

US President Donald Trump said it plans to rescind an Obama-era program that would allow foreign entrepreneurs who launch startup companies in the U.S which is known as ‘Startup Visas’.

Having constricting the H1B visa immigration policies that allowed US companies to temporarily employ foreign nationals, they are now working strictly to restrict startup visas.

The programme, called the International Entrepreneur Rule, allows non-US citizens who launch companies that won $100,000 in government grants or received $250,000 in venture capital investment to stay in the US.

The term of their stay is for a renewable 30-month term, according to Bloomberg reports.

The Rule was supposed to come into effect on July 17. However, the Trump administration has announced that it would delay the program until next March, adding that the Department of Homeland Security needs to have an additional review of the program.

Steve Case, founder of America Online (AOL) and now CEO of the Revolution LLC took to twitter to call the possible cancellation of the program as a big mistake.

“Immigrant entrepreneurs are job makers, not job takers,” he said.

As reported by Bloomberg Report ,

The National Venture Capital Association, an industry trade group, criticized the step in a statement.

“At a time when countries around the world are doing all they can to attract and retain talented individuals to come to their shores to build and grow innovative companies, the Trump Administration is signaling its intent to do the exact opposite,” Bobby Franklin, president and CEO of the trade group said.

The ban on travel from six Muslim majority countries drew criticism from a wide swath of companies including Amazon.com Inc.,Facebook Inc. and Google corporate parent Alphabet Inc. joining a legal brief criticizing the executive order. These technology firms have also criticized the administration’s efforts to restrict access to H-1B visas for high-skilled workers.

A group of Republican senators last month sent Homeland Security Secretary John Kelly a letter calling the rule consistent with the administration’s “goals of stimulating the economy and creating job growth at home.”

“There is little benefit to losing any more ground in attracting entrepreneurs and their investments,” the senators, which include Arizona’s John McCain and Jeff Flake, Utah’s Orrin Hatch, and Jerry Moran of Kansas, said in the letter.

The Trump administration, earlier this year, had also made the popular H-1B visa difficult to access for the immigrant workers with its revised rules and criteria.