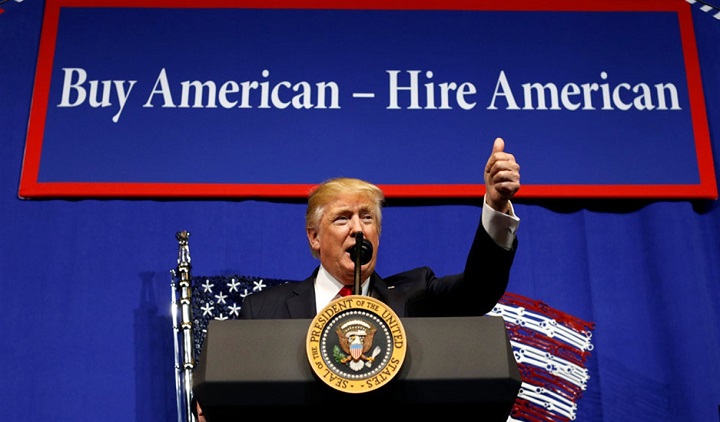 President Trump signs executive order ,demonstrating that he is living up to his promises to protect American jobs and impose existing laws to support American workers in getting american jobs and employment careers.
The order tasked four department heads (including the Secretary of Labor, who has yet to be confirmed) to suggest reforms to ensure H-1B visas are given to the “most-skilled or highest paid” petitioners. Additionally, it asked them to propose new rules and guidance for preventing fraud and abuse of work visas.

Trump signed an executive order that called for a review of the H-1B visa programme, saying they should never be used to replace American workers and must be given to the most skilled and highest paid applicants.

Trump made it clear that he doesn’t agree with fact that H-1Bs are currently allotted out under a lottery system.

“Right now, H-1B visas are awarded in a totally random lottery and that’s wrong,” he said on Tuesday in Wisconsin, where he signed the order.

The annual quota for H-1B is 85,000 for new H-1B visas with 20,000 reserved for master’s degree holders. H1B visa applications opened on April 3 for Fiscal Year 2018 and closed five days later when the cap limit reached. This was the 5th consecutive year that the cap was met within five days. This year, 199,000 applications were received.

There have been several bills introduced in recent months to reform the H-1B visa system. Their bill proposed eliminating the lottery in favor of a “preference system” so that foreign students educated in the U.S. would get priority. It would give a “leg up” to advanced degree holders, those being paid a high wage and those with valuable skills. The bill among the other things, appeals for more than doubling the minimum salary of H-1B holders to $130,000 per annum.

H-1B visas are used to fill the U.S. skills gap, but critics, including the Trump administration have voiced concern about abuse of the program. In some cases, outsourcing firms flood the system with applicants, obtaining visas for foreign workers and then contracting them out to tech companies.

“I’m not worried immediately about my clients – but I am worried about what’s to come,” Tahmina Watson, of Watson Immigration Law, said.

You can also check for:

The actual number of foreign workers especially Indians working in the US under the H1B programme is significantly higher, however, because H1B visas typically roll over in a three year plus three year cycle.

This reform, coupled with the anticipated wage hike for H1B visa holders, may have significant cost pressure on the Indian IT employers that sponsor H1B visa or services providers. Indian IT firms said they would look at adapting the business model with lesser dependence on these work visas.

“While US companies will find some tech talent in the US, the numbers might be less than what are required to meet their needs. Add to that, the wages they need to pay to US employees will be much higher than what they pay to H-1B visa holders,” said CK Guruprasad, a consultant with executive search firm Spencer Stuart.

“Even before this latest executive order it is clear that the Indian Service provider industry was taking steps to reduce their dependency on H1B as reflected by the drop in overall applications for H1B from 236,000 last year to 199,000 this year. The majority of this reduction is thought to be the reduced number of applications that the service providers are submitting,” pointed out Bendor-Samuel.

On Tuesday, Australia abolished the 457 visa programme used by over 95,000 temporary foreign workers, the majority of them Indians, to tackle unemployment.

From the time the Immigration Act of 1990 opened the H1B floodgates for Indians till 2016. The H1B has never been in such sharp focus as it has been in the last 100 days after the Trump government came to action.