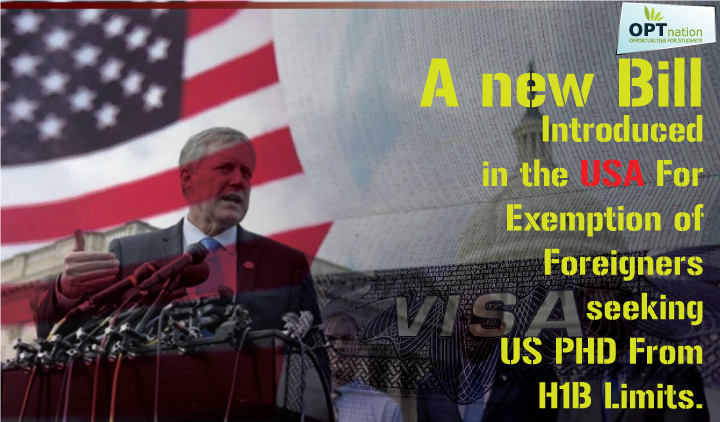 A bill has been re-introduced in the US House of Representatives that seeks exemption for foreign-born or non-US citizens holding an US Ph.D. from American universities in science, technology, engineering or mathematics from the limitations in the annual cap for the H1B visa; employment-based green cards and H1B visas awarded annually.

This Act “Stopping Trained in America Ph.Ds from Leaving the Economy” (STAPLE) Act was introduced in the US House of Representatives by Congressmen Erik Paulsen and Mike Quigley.

“It is no surprise that the brightest minds from around the world come to the United States to pursue their advanced degrees, and we should be doing all we can to ensure students we educate and train here use what they’ve learned to contribute to the American economy,” said Congressman Erik Paulsen.

“With thousands of high-skilled jobs going unfilled, the STAPLE Act makes sure American companies are getting the talent they need. By stapling a green card or (a) visa to their diplomas, these professionals can invent and innovate new discoveries that grow our economy,” Paulsen said.

And there is a high percentage of a seat for these speciality jobs going vacant, so it becomes imperative to tap into this resource to the best advantage for the economy, he argues.

Quigley, in his remarks, said if the US was serious about fostering innovation, spurring economic activity, and staying competitive in the global marketplace, it must encourage the brightest minds in the world to study, work, and stay in its communities. “We cannot advance our technology or research if we continue sending foreign-born, but US educated, students with advanced degrees away,” he said.

Earlier this year in Feb ,  H1B reform bill was introduced in the US by two Congressman Lawyers which among other things, calls for more than doubling the minimum salary of H-1B visa holders to $130,000 per annum.

As of March 3, the H1B premium processing was also suspended by U.S.C.I.S which came effective on 3rd April for at least six months.

The STAPLE ACT bill for foreigners with PhD is likely to benefit majorly Indians as they constitute the largest number of students doing PhD in the US.

This change in the recent policy has brought in a wave of hope for students thronging to the US in search of better opportunities. Now the foreign PhD students have to harness their talent and expertise, and contribute to the American economy.

Noting that the H1B visas are subject to annual caps that are woefully short of the number necessary to fill high- skilled jobs, the two lawmakers in a statement said numerous studies have found that H1B visas correspond with an increase in jobs for native citizens.

Now after the H1B visa reform to curb on H1B visa abuse there are some risks on the STEM students with a chance the Trump admin could revoke 24 Months STEM OPT Extension and may revoke H-4 EAD.

The lawmakers are especially determined to curb any violations and any misuse of the visa policies shall be dealt with strictly.

For example, a 2011 American Enterprise Institute study found that “an additional 100 foreign-born workers in STEM (science, technology, engineering, or mathematics) fields with advanced degrees from US universities is associated with an additional 262 jobs among US natives,” they said.

In April, US President Donald Trump signed an executive order to stop “visa abuses” and for tightening the rules of the H1B visa programme used by companies to hire foreigners for high-skilled jobs. Trump said his administration is going to enforce ‘Hire American Buy American’ rules that are designed to protect jobs and wages for the Americans. The executive order also called upon the Departments of Labour, Justice, Homeland Security, and State to take action against fraud and abuse of our visa programmes.